Fr. Giulio Mancinelli on the Conversion of England 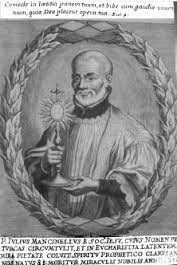 
In the last post, Christ Declared the King of Poland, we had noted how the crowning of the Black Madonna of Częstochowa as Queen of Poland by King John II Casimir in 1656 was made in direct response to private revelations received by Servant of God Giulio Mancinelli, a much respected Jesuit missionary who flourished between 1537-1618. Given the fact that the private revelations of Giulio Mancinelli were so integral to the crowning of the Black Madonna (an event which would later tie in with the subsequent role Poland played in attaining victory during the Battle of Vienna), it should be worth taking in consideration some of the other lesser known private revelations recorded by this mystical priest. Especially in light of the recent proclamation of Christ as the King of Poland by both the state and Church authorities between 19th-20th Nov, 2016 - which parallels the request to crown Our Lady as Queen of Poland, which was initially given to Fr. Mancinelli by the Blessed Virgin herself.

While on a mission to England in 1608, Fr. Mancinelli reported that he had been visited by angels, who revealed to him the future destiny of this country in a series of visions:

"He beheld regions laid waste by all kinds of tempests, and so desolated by thunder, lightning, rain, hail, hurricanes and dreadful earthquakes that their wretched inhabitants knew not whither to flee for safety; even the caverns of the earth afforded no refuge. Being thus beyond all human help, the Father saw them at length with one accord prostrate and crying to God for mercy; he next heard this voice from Heaven: "It is not so much your sins as the enormities of your kings and rulers that has brought you to this condition, and subjected you to such severe punishments. But now know ye that I will deal with you in mercy, and raise your Church to a dignity that it has never heretofore attained. You shall win over the Turks and heretics under my protection, and with manifest prodigies from heaven such triumphs and victories that will astonish the rest of Europe. Lastly, the central sanctuary of the world, which I first established in Jerusalem, and which at present hallows the city of Rome, shall be placed in your midst, so that all surrounding nations shall congratulate you on your happiness. These special blessings shall be bestowed upon you for the sake of the eminent merits of the saints of this kingdom, and the hardships and the sufferings they have undergone for My sake."
(Jesuit Annual Letter of 1605. "Copie of a revelation made to Father Julius Mancinelli, S.J., concerning the success of the Kingdome of England")

This vision of the conversion of England ties in quite well with the original secret of La Salette given to Maximin Giraud, which similarly foretells that it is this event that eventually leads to the re-evangelisation of the world:

France has corrupted the universe, one day it will be punished. The faith will die out in France: three quarters of France will not practice religion anymore, or almost no more, the other part will practice it without really practicing it. Then, after [that], nations will convert, the faith will be rekindled everywhere. A great country, now Protestant, in the north of Europe, will be converted; by the support of this country all the other nations of the world will be converted.

Fr. Mancinelli's prophecy of the conversion of England after it has been struck by a series of calamities also shares many affinities with a famous prophecy made by St. Malachy:

Ireland will suffer English oppression for a week of centuries, but will preserve her fidelity to God and His Church. At the end of that time she will be delivered, and the English in turn must suffer severe chastisement. Ireland, however, will be instrumental in bringing back the English to the unity of Faith.

Although much doubt surrounds the authenticity of the other more well known list of popes attributed to St. Malachy, no such misgivings exist concerning this particular prophecy, which was uncovered in Clairvaux Abbey in the late 17th century, when the Benedictine scholar Dom Jean Mabillon was conducting research into the writings of St. Bernard. As a personal friend of St. Bernard, St. Malachy had spent some time at Clairvaux Abbey during his first pilgrimage to Rome, and had died there while making a second journey to the Eternal City in 1148.

When we compare Fr. Mancinelli's vision with the prophecy of St. Malachy, we can be almost certain that the chastisement which he saw afflicting England should be equated with its involvement in the wars of the 20th century, since we are told that its punishment was set to take place after Ireland was delivered from English oppression. The seven centuries of the English oppression of Ireland mentioned by St. Malachy extended from the Norman conquest in the late 12th century to the creation of the Irish Republic following the War of Independence in 1921.

During his famous "Second Spring" Sermon, Bl. John Henry Cardinal Newman, also commented on the prophetic role of England, which has been historically regarded as the "Dowry of Mary":

And others, also, his equals or his juniors in history, whose pictures are above our altars, or soon shall be, the surest proof that the Lord's arm has not waxen short, nor His mercy failed,—they, too, are looking down from their thrones on high upon the throng. And so that high company moves on into the holy place; and there, with august rite and awful sacrifice, inaugurates the great act which brings it thither." What is that act? it is the first synod of a new Hierarchy; it is the resurrection of the Church.
O my Fathers, my Brothers, had that revered Bishop so spoken then, who that had heard him but would have said that he spoke what could not be? What! those few scattered worshippers, the Roman Catholics, to form a Church! Shall the past be rolled back? Shall the grave open? Shall the Saxons live again to God? Shall the shepherds, watching their poor flocks by night, be visited by a multitude of the heavenly army, and hear how their Lord has been new-born in their own city? Yes; for grace can, where nature cannot. The world grows old, but the Church is ever young. She can, in any time, at her Lord's will, "inherit the Gentiles, and inhabit the desolate cities."
"Arise, Jerusalem, for thy light is come, and the glory of the Lord is risen upon thee. Behold, darkness shall cover the earth, and a mist the people; but the Lord shall arise upon thee, and His glory shall be seen upon thee. Lift up thine eyes round about, and see; all these are gathered together, they come to thee; thy sons shall come from afar, and thy daughters shall rise up at thy side." "Arise, make haste, my love, my dove, my beautiful one, and come. For the winter is now past, and the rain is over and gone. The flowers have appeared in our land… the fig-tree hath put forth her green figs; the vines in flower yield their sweet smell. Arise, my love, my beautiful one, and come." It is the time for thy Visitation. Arise, Mary, and go forth in thy strength into that north country, which once was thine own, and take possession of a land which knows thee not. Arise, Mother of God, and with thy thrilling voice, speak to those who labour with child, and are in pain, till the babe of grace leaps within them! Shine on us, dear Lady, with thy bright countenance, like the sun in his strength, O stella matutina, O harbinger of peace, till our year is one perpetual May. From thy sweet eyes, from thy pure smile, from thy majestic brow, let ten thousand influences rain down, not to confound or overwhelm, but to persuade, to win over thine enemies. O Mary, my hope, O Mother undefiled, fulfil to us the promise of this Spring. A second temple rises on the ruins of the old.
(Cardinal John Henry Newman, The Second Spring, preached July 13th, 1852, in St. Mary's, Oscott, in the first Provincial Synod of Westminster. See here for the full text)

So the conversion of England is definitely a major theme in Catholic prophecy. An interesting original feature of Fr. Mancenelli's vision is that it appears to make the rather bold claim that the papacy will one day be relocated to England itself, which at first, seems rather incredulous. However, once we take into account the various prophecies which foretell that the pope will one day be forced to flee Rome, and indeed the visions of Blessed Elena Aiello, who saw Russian flagstaffs flying above the dome of St. Peter's Basilica, it is quite within the realms of possibility that the Church hierarchy would attempt to find sanctuary in another country if Italy was invaded by a power that will eventually be openly hostile to Catholicism (most likely under the auspices of the Antichrist himself). And if England is by this stage once again restored to the Catholic Faith, then the relative safety that the island of Britain provides against foreign invasion due to its geographical location may just clinch it as one of the most attractive places in Europe to provide refuge for the papacy.