The Miracle of the Sun and Our Lady of the Rosary 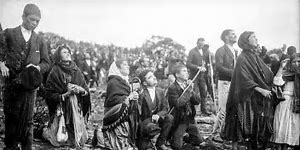 Today, October 13th, 2019, is the anniversary of the Miracle of the Sun.  Looking back at this old blog post from 2014 on the subject of Sr. Lucia's recently published 1944 vision experienced at Tuy (here), it seems to be an even stranger "coincidence" that the earthquake swarm which struck Cumbre Vieja was on 7th October, 2017 (the centennial year of Fatima) - the feast day of Our Lady of the Rosary.  The above blog post, which notes the importance of the feast of Our Lady of the Rosary, has been left unedited since 2014. This is noteworthy, since my material on the significance of the 1999 solar eclipse traversing the site of ancient Nineveh is prevalent at the end of the article.  This is well before my material on the subject of the interpretation of the "sign of Jonah" and the eclipse at Nineveh went viral in 2017, after being plagiarised by Pastor Mark Biltz in the run-up to the Great American Solar Eclipse.

Below is the later article plagiarised by Pastor Mark Biltz, and the relevant YouTube video:


Also worth noting is the fact that my material on Sr. Lucia's 1944 Tuy vision was covered by the British Tabloid The Daily Star just before the centenary of the Miracle of the Sun (here), and a few weeks later, there were fears that Cumbre Vieja was about to erupt after the occurrence of an earthquake swarm began on October 7th - the feast of Our Lady of the Rosary - which was also covered by The Daily Star (here).