St. Michael and the Burning Mountain 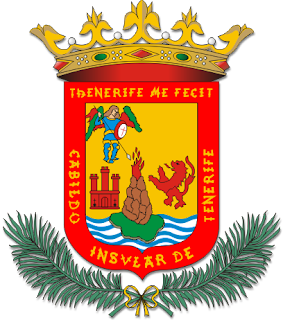 During the course of researching a topic for an updated version of my book, I stumbled across the official coat of arms of Tenerife, one of the Canary Islands, which shows the Archangel Michael standing with a lance over a volcano situated in the sea.  This image is highly evocative of the vision seen by Sr. Lucia when she was instructed to commit the Third Secret to writing in 1944:

‘I felt my spirit flooded by a light-filled mystery which is God and in Him I saw and heard: the point of the flame-like lance which detaches, touches the axis of the earth and it [the earth] shakes: mountains, cities, towns and villages with their inhabitants are buried. The sea, rivers and clouds leave their bounds, they overflow, flood and drag with them into a whirlpool, houses and people in a number unable to be counted; it is the purification of the world from the sin it is immersed in.

In this new version of my book, which will soon be published under the title Unveiling the Apocalypse: The Final Passover of the Church, just one of the many new subjects being covered is the how the Canary Islands figured in ancient Greek mythology as the location of Elysium and the Isles of the Blessed, which were said to lie in the far west of the known world at the entrance to Hades, which also was also where the Titans were said to have been bound in the depths of Tartarus. In this updated version of Unveiling the Apocalypse, I will show in extended detail how the Book of Enoch directly bases its story of the Watchers on the Titans of Greek mythology, which in turn forms the basis of several prophecies found in the epistles of St. Peter and St. Jude, and even the Apocalypse itself.  The Book of Enoch, which details how seven "burning mountains" stand at the entrance to Tartarus, can thus be used to establish that these are one and the same as the seven volcanic islands of the Canary archipelago.  Given that it has already been established that the Apocalypse frequently alludes to the Book of Enoch, we can be almost certain that the "great mountain, burning with fire" being thrown into the sea in Rev 8:8 is one of the seven burning mountains described throughout the Enochian literature.
Posted by Emmett O'Regan at 19:48 127 comments: