Our Lady of Akita, the Sign of Jonah, and the Coronavirus Pestilence 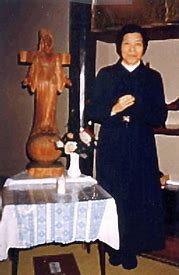 Patrick Archbold has made an interesting observation about the timing of the Coronavirus outbreak in relation to a recent private revelation issued by Sr. Agnes Sasagawa on 6th October, 2019 (the vigil of the Feast of the Holy Rosary):


Some food for thought, folks.
In 1973, Sr. Agnes Sasagawa of Akita Japan received a dire warning of a coming chastisement. She warned of Cardinals opposing Cardinals, bishops against bishops. You know the one.
What you might not know is that after decades of silence, in October of last year she reportedly received a message from her angel which was simply, “Cover in ashes and please pray the Penitential Rosary every day." This is a fairly clear allusion to the 40 day warning of Jonah to Ninevah to repent or be destroyed.
Scientists estimate that the Wuhan virus first emerged in November of 2019, or around 40 days later.
"Earlier reports from Chinese health authorities and the World Health Organization had said the first patient had onset of symptoms on 8 December 2019—and those reports simply said “most” cases had links to the seafood market, which was closed on 1 January. Lucey says if the new data are accurate, the first human infections must have occurred in November 2019"
40 days. And December 8th and January 1st.
Impossible to say anything definitive but from Fatima to Akita to now. We can't say we weren't warned. Like I said, food for thought.
(See Patrick's post at the Creative Minority Report blog here).

James Delinis was the first to notice the connection between Sr. Agnes' recent private revelation and the message of the Prophet Jonah to ancient Nineveh at his blog Camp of the Saints (see here). As regular readers of this blog will know, I have previously connected the interpretation of the "sign of Jonah" with the interpretation of the Third Secret of Fatima. The hand of the angel with the flaming sword being stayed by the rays of light issuing from the hands of the Blessed Virgin (which is lifted from the imagery of the Miraculous Medal), represents the very real threat of a chastisement being stayed. Just as the original "sign of Jonah" was connected with a 40 day countdown and the occurrence of the Bur Sagale eclipse during the ministry of the Prophet Jonah, the centenary of Fatima was marked by a 40 day countdown from the Great American Solar Eclipse of 2017. During this time, not only was the world brought to the brink of nuclear war at the height of the North Korean crisis, but a remarkable series of natural disasters unfolded, including a number of unprecedented hurricanes and earthquakes, followed by an earthquake swarm at La Palma in the Canary Islands, sparking fears of a potential mega-tsunami generated by the lateral collapse of the volcano Cumbre Vieja. A future event which I argue is connected with Sr. Lucia's 1944 Tuy apparition, which she received immediately before committing the contents of the Third Secret of Fatima to writing.

In blog post Our Lady of Guadalupe and the Flood from the Dragon's Mouth, I had noted that the fact that the epicenter of one of the earthquakes that took place during this 40 day period period struck the site of Akita prefecture in Japan was noteworthy, considering its renown as an apparition site.

The below video gives an overview of the apparitions of Our Lady of Akita, which were approved by Bishop Ito (although it must be noted that there is some continuing controversy surrounding this issue).

Given the fact that the appearance of Coronavirus took place roughly 40 days after Sr. Agnes issued her latest private revelation in October 2019 (after decades of silence) gives us serious pause for thought. Especially since this private revelation is also so closely linked with the "sign of Jonah" - which originally involved not just a solar eclipse, but also a series of pestilences and a period of social unrest, before the Ninevites were eventually brought to repentance by adorning sackcloth and ashes. (See my previous blog post The Sign of Jonah and the Binding of Satan) The world has now been suddenly brought to the greatest point of crisis seen since the Second World War, in the very year which I highlighted as being of considerable importance in my book Unveiling the Apocalypse: The Final Passover of the Church (published in 2016). In Sr. Agnes' recent private revelation, the call to repentance by adorning sackcloth and ashes has become more clear than ever, and the world cannot go on ignoring the numerous signs that have been given by God of the chastisement that awaits if we continue to turn our backs on Him.