The Apocalyptic Plagues of Egypt 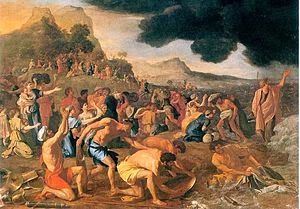 The Crossing of the Red Sea, by Nicolas Poussin, circa1633


In light of the recent publication of the vision of a colossal flood seen by Sr. Lucia when she was asked by the Blessed Virgin Mary to write down the content of the Third Secret of Fatima, I thought it should be worth revisiting the content of an important earlier post on this subject. The natural causes behind the events of the Exodus has once again been brought into focus by the recent screening of Ridley Scott's controversial take on the history behind this event in his Exodus: Gods and Kings, when he depicted the long theorized drainage of the Sea of Reeds (the most accurate translation above the "Red Sea") being caused by a tsunami. While Scott's version of the causes of some of the other plagues of Exodus is seriously flawed, it is worth taking note that its primary inspiration is taken from a quite convincing theory discussed by many leading theologians that these events were actually caused by the most catastrophic volcanic eruption in human history - that of Thera, Santorini, cicra 1500BC. Given the fact that the Apocalypse bases its imagery of the "huge mountain, burning with fire" being thrown into the sea on the events behind the plagues of Exodus, it prompts us to consider the possibility that the destruction of the eschatological empire referred to as "Babylon" will in turn be caused by yet another record-breaking volcanic eruption.

One of the most extraordinary aspects of the Book of Revelation's re-imagining of the story of the Exodus, is that it appears to have been aware that the plagues of Egypt were associated with a "great mountain, burning with fire" being thrown into the sea (Rev 8:8) - millennia before the Santorini/Exodus hypothesis was first postulated in modern biblical scholarship. The theory that the Thera eruption was the source of the plagues described in the Book of Exodus, was first forwarded by the Egyptologist Hans Goedicke during the early 1980's, and has since become one of the most widely accepted explanations for the events of the Exodus in modern biblical scholarship. The eruption of Santorini, which destroyed the Greek island of Thera between 1600-1500 BC, was one of the largest volcanic eruptions in recorded history. With an estimated value of 7 out of a possible 8 on the Volcanic Explosivity Index (VEI), the Thera eruption brought about the collapse of the Minoan civilisation on the island of Crete, and is thought by many scholars to be the primary inspiration for the myth of Atlantis recounted in Plato's Timaeus and Critias. 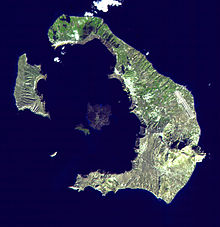 Satellite image of the Santorini caldera - the remains of the eruption which devastated Thera in the mid-second millennium BC.
Given that this eruption is dated to roughly the same time period as the Exodus, many biblical scholars and Egyptologists have attempted to establish how this event could have led to the sequence of events described in the Bible. The Book of Exodus tells us that the first plague to strike Egypt was that of the river Nile turning blood red. This phenomenon has been attributed to the rapid growth of an algal bloom (red tide), resulting from either the release of sediments or trapped gases under the Nile by the increased level of seismic activity which often accompanies volcanic eruptions, or by the falling volcanic debris entering the waters of the Delta. The algae which cause red tide thrive in extreme conditions and temperature changes associated with volcanic activity, and quickly deplete oxygen levels whilst producing natural toxins. This kills any marine life in the affected areas - an event which recalls the repercussions of the mountain being cast into the sea in Rev 8:8:The second angel blew his trumpet, and something like a great mountain, burning with fire, was thrown into the sea, and a third of the sea became blood. A third of the living creatures in the sea died, and a third of the ships were destroyed.(Rev 8:8-9)Whilst the fish in the Nile would have been suffocated by the algae, large swathes of frogs would have been forced out of the waterways, leading to the second plague of Exodus. The frogs would have quickly died without water, and their rotting bodies along with those of the fish in the river would have attracted swarms of flies and gnats/lice, which would be able to proliferate more freely without their natural predators. This then accounts for the third and fourth plagues, and the disease spread by the increase of flies, mosquitoes, etc would have led to the fifth and sixth plagues - boils appearing on livestock and humans.The plague of the hail of fire mixed with ice would have been caused by the fall of the volcanic debris that was ejected into the air during the ongoing eruption at Santorini. Volcanic ash and pumice from the Thera eruption has been discovered at several archaeological sites across Egypt, making it certain that the Egyptians would have been badly affected by this cataclysm. And the plague of locusts has been explained as the mass displacement of these creatures around the Aegean by the ash cloud issuing from Santorini, coupled with the rise in humidity, causing them to descend en masse onto northern Egypt. The ash cloud would then also account for the plague of darkness that swept the land for three days.The deaths of the firstborn during Passover is somewhat more difficult to put down to a scientific explanation, with theories ranging from a poisoning of the food supplies - which the firstborn would have been privileged to above other family members during a period of famine; to ritual human and animal sacrifice. Although it would be a mistake to divorce the events of the Exodus from the miraculous altogether. From a faith-based perspective, it seems best to view these events as a series of cause and effect natural events interspersed with elements of the miraculous, all of which were governed by an overriding supernatural power.The parting of the Sea of Reeds has then been attributed to a tsunami caused by the main eruption of Santorini. This main eruption caused a large scale volcanic collapse, which generated a massive tsunami that devastated the Minoan civilisation on the adjacent island of Crete. There is  also some archaeological evidence to suggest that the tsunami generated by this collapse affected the coast of the Eastern Mediterranean. A study published by the Geological Society of America in 2009 extrapolated the following results from the archaeological data:A sedimentary deposit on the continental shelf off Caesarea Maritima, Israel, is identified, dated, and attributed to tsunami waves produced during the Late Bronze Age (ca. 1630–1550 B.C.E.) eruption of Santorini, Greece. The sheet-like deposit was found as a layer as much as 40 cm thick in four cores collected from 10 to 20 m water depths. Particle-size distribution, planar bedding, shell taphoecoensis, dating (radiocarbon, optically stimulated luminescence, and pottery), and comparison of the horizon to more recent tsunamigenic layers distinguish it from normal storm and typical marine conditions across a wide (>1 km2) lateral area. The presence of this deposit is evidence that tsunami waves from the Santorini eruption radiated throughout the Eastern Mediterranean Sea, affecting the coastal people living there. (See here)Given that the tsunami waves reached as far as Israel, then it is almost certain that they would also have affected the northern coast of Egypt. 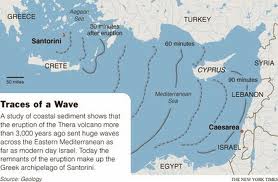 Once we take into consideration the fact that Sr. Lucia described an event extremely similar to this when she instructed by the Blessed Virgin Mary to commit the Third Secret to writing, we should take the threat of this future event extremely seriously indeed:

‘I felt my spirit flooded by a light-filled mystery which is God and in Him I saw and heard: the point of the flame-like lance which detaches, touches the axis of the earth and it [the earth] shakes: mountains, cities, towns and villages with their inhabitants are buried. The sea, rivers and clouds leave their bounds, they overflow, flood and drag with them into a whirlpool, houses and people in a number unable to be counted; it is the purification of the world from the sin it is immersed in. Hatred, ambition, cause destructive wars...
(Sr. Lucia, Tuy, January 3rd, 1944)

The Secrets of La Salette on the Triumph of the Church 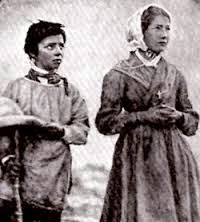 While reading back through my blog in the course of researching my new book, which is working under the title The Ark of God: The Theotokos and the End Time Conversion of the Jews, I came across the following interesting snippet which may be related to the Worthy Shepherd Prophecy of Blessed Tomasuccio de Foligno:

On an interesting side note, Melanie foretold that neither Pope John Paul II (who is generally agreed to be the pope who cannot be killed by his would be assassins in the secret), nor his successor (Benedict XVI) would live to see the Second Pentecost that follows the Great Apostasy - which means that it predicts that this will take place during the pontificate of the next pope:"The Holy Father will suffer greatly. I will be at his side to the end in order to receive his sacrifice. The wicked will make several attempts on his life, but they cannot harm him. But neither he nor his successor will live to see the triumph of the Church of God."

The original post (found here), was written some time before I happened across the Worthy Shepherd Prophecy prior to the election of Pope Francis, and I had completely forgotten about this portion of the unapproved version of the Secrets of La Salette.
Posted by Emmett O'Regan at 21:16 52 comments: