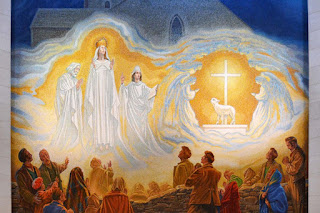 In the year dedicated to St. Joseph, Pope Francis has recently announced that the shrine of Our Lady of Knock, in Mayo, Ireland, will be granted special status as an international Marian and Eucharistic Shrine, on March 19th, 2021 - the feast of St. Joseph.  The fact that the Holy Father has announced that Knock Shrine will be bestowed with this special honour just a few days after his pilgrimage to Iraq, where he visited the site of ancient Nineveh at Mosul, bears a striking parallel to the material in my book on the Knock apparition.  As most readers of this blog will be aware, in my book Unveiling the Apocalypse: The Final Passover of the Church, I argue that the symbolism of the Knock apparition is directly based on the opening of scroll sealed with seven seals described in chapter 5 of the Book of Revelation:

In my book, I argue that the opening of the scroll with the seven seals and the subsequent release of the Four Horsemen of the Apocalypse is recapitulated later in Rev 20, during the period of the unbinding of Satan at the end of the "thousand years":

Then I saw an angel coming down from heaven, holding in his hand the key to the bottomless pit and a great chain. And he seized the dragon, that ancient serpent, who is the devil and Satan, and bound him for a thousand years, and threw him into the pit, and shut it and sealed it over him, so that he might not deceive the nations any longer, until the thousand years were ended. After that he must be released for a little while...

And when the thousand years are ended, Satan will be released from his prison and will come out to deceive the nations that are at the four corners of the earth, Gog and Magog, to gather them for battle; their number is like the sand of the sea. And they marched up over the broad plain of the earth and surrounded the camp of the saints and the beloved city, but fire came down from heaven and consumed them, and the devil who had deceived them was thrown into the lake of fire and sulfur where the beast and the false prophet were, and they will be tormented day and night forever and ever. (Rev 20:1-3; 7-10)

In my blog post The Sign of Jonah and the Unbinding of Satan, I argue at some length that the period of the unbinding of Satan described in the Apocalypse is directly associated with the original "sign of Jonah", which was a striking solar eclipse which had taken place near the site of ancient Nineveh during the ministry of the Prophet Jonah, which had caused the repentance of the Ninevites, sparing them from God's judgement. In my book, I also attempt to demonstrate the various parallels between the unbinding of Satan at the end of the Millennium and the vision of Pope Leo XIII, concerning the century in which the Devil would be granted a period of greater power. I go on to note that in the Gospel of Matthew, Christ had associated the binding of the "strong man" in Matt 12 with the appearance of the sign of Jonah:

Then a demon-oppressed man who was blind and mute was brought to him, and he healed him, so that the man spoke and saw. And all the people were amazed, and said, “Can this be the Son of David?” But when the Pharisees heard it, they said, “It is only by Beelzebul, the prince of demons, that this man casts out demons.” Knowing their thoughts, he said to them, “Every kingdom divided against itself is laid waste, and no city or house divided against itself will stand. And if Satan casts out Satan, he is divided against himself. How then will his kingdom stand? And if I cast out demons by Beelzebul, by whom do your sons cast them out? Therefore they will be your judges. But if it is by the Spirit of God that I cast out demons, then the kingdom of God has come upon you. Or how can someone enter a strong man's house and plunder his goods, unless he first binds the strong man? Then indeed he may plunder his house...

Then some of the scribes and Pharisees answered him, saying, “Teacher, we wish to see a sign from you.” But he answered them, “An evil and adulterous generation seeks for a sign, but no sign will be given to it except the sign of the prophet Jonah. For just as Jonah was three days and three nights in the belly of the great fish, so will the Son of Man be three days and three nights in the heart of the earth. The men of Nineveh will rise up at the judgment with this generation and condemn it, for they repented at the preaching of Jonah, and behold, something greater than Jonah is here. (Matt 12:22-29; 39-41)

In his City of God, St. Augustine of Hippo had connected the above Gospel passage concerning the "binding of the strong man" with the binding of Satan described in Rev 20.  St. Augustine went on to propose that the period of the unbinding of Satan at the end of the thousand years would take place at the end of the Sabbath Millennium discussed by the Early Church Fathers, who proposed that the biblical chronology pointed to a prophetic "great week" of millennia:

Now the thousand years may be understood in two ways, so far as occurs to me: either because these things happen in the sixth thousand of years or sixth millennium (the latter part of which is now passing), as if during the sixth day, which is to be followed by a Sabbath which has no evening, the endless rest of the saints, so that, speaking of a part under the name of the whole, he calls the last part of the millennium — the part, that is, which had yet to expire before the end of the world — a thousand years; or he used the thousand years as an equivalent for the whole duration of this world, employing the number of perfection to mark the fullness of time.

St. Bede the Venerable had used  the "Hebrew Truth" of the Masoretic text of the Old Testament to recalibrate the biblical chronology, when when refined by the Anglican Archbishop, James Ussher of Armagh, relocated the prophetic significance of the end of the "great week" as the year 2000. Just over 100 years before the end of this "great week" of millennia, Pope Leo XIII had announced the consecration of the entire world to the Sacred Heart of Jesus in his 1899 encyclical Annum Sacrum, which was published on the feast of St. Bede. Later the same year had announced that this Anglo-Saxon monk would be made a doctor of the Church. This act of consecration was made in direct response to a request made by Christ to Blessed Mary of the Divine Heart, which in turn directly parallels the request made to consecrate France to the Sacred Heart of Jesus, given to St. Margaret Mary Alacoque. Pope Leo XIII was almost certainly familiar with the fact that the French Revolution had occurred exactly 100 years after St. Margaret Mary had relayed this request to the Kings of France, which had went unfulfilled. This is why he described his consecration of the entire world to the Sacred Heart of Jesus as the "greatest act of my pontificate".
In Unveiling the Apocalypse, I note how the beginning of the First World War had coincided with a remarkable solar eclipse which had traversed the battlefields of Eastern Europe, before the path of totality made its way down to cross the site of ancient Nineveh. 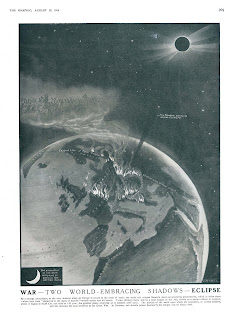 This striking event, known as the "First World War Eclipse", had occurred on 21st August, 1914 - the feast day of Our Lady of Knock, which had announced the opening of the scroll sealed with seven seals, which in turn heralds the inauguration of the period of the unbinding of Satan.  In order to mark the 100 year anniversary of Pope Leo's consecration of the human race to the Sacred Heart of Jesus, Pope St. John Paul II published an Apostolic Letter reflecting upon the spiritual significance of this event in the life of the Church on 11th June 1999, and once again renewed this act of consecration. Just a few months later, the "sign of Jonah" had repeated itself when the great solar eclipse of 1999 had once again traversed the site of ancient Nineveh on Aug 11th, announcing the end of the period of the unbinding of Satan at the dawn of the new millennium.