All Things Made New 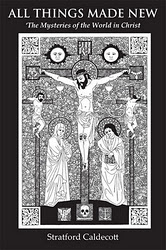 As anyone with a scholarly interest in the Book of Revelation will know, there is a relative paucity of contemporary books which offer a specifically Catholic angle on the Apocalypse. An excellent new book by Stratford Caldecott - All Things Made New, helps to remedy this situation. Caldecott is the chief editor of the Catholic journal Second Spring, the editor of the UK version of the monthly prayerbook Magnificat, and also works on the editorial board of Communio (the highly influential theological journal established by Cardinal Ratzinger and Hans Ur Von Balthasar). He is also the author of several other works, including Beauty for Truth's Sake (a manifesto advocating a revival of education in the liberal arts - which also contains an excellent treatment of the spiritual significance of number symbolism), Secret Fire: The Spiritual Vision of JRR Tolkien, The Seven Sacraments: Entering the Mysteries of God, and the Catholic Truth Society booklet The Companion to the Book of Revelation - which is the best introductory text to the Apocalypse available.

All Things Made New is a unique christocentric work, which attempts to explore the Christian mysteries through the eyes of the two figures stood before the Cross - the Apostle John and the Virgin Mary. It highlights the need for a greater emphasis on the role of mystagogy in the modern believer, which played such a central part in the life of the Early Church. Caldecott argues that mystagogy - the initiation into the Christian mysteries, should be viewed as a lifelong experience which continues well after the initial introduction to the sacraments. The ultimate aim of this spiritual journey is to arrive at theosis - to become like God. A goal which is summarised by the Catechism of the Catholic Church:

The Word became flesh to make us "partakers of the divine nature": "For this is why the Word became man, and the Son of God became the Son of man: so that man, by entering into communion with the Word and thus receiving divine sonship, might become a son of God." "For the Son of God became man so that we might become God." "The only-begotten Son of God, wanting to make us sharers in his divinity, assumed our nature, so that he, made man, might make men gods." CCC 460

Caldecott divides this personal spiritual quest into two parallel sections corresponding to those present at the foot of the Cross, and explores it through the binary lens of St. John's Apocalypse (the ultimate mystagogical text of the New Testament), and the Rosary  - which encapsulates the whole Christian mystery through prayer and contemplation. As such, the book not only provides an excellent holistic analysis of the Book of Revelation, but also acts as a guide to prayer and reflection. And of course adoration of the Trinity through liturgy is after all the underlying unifying theme of the Apocalypse.
Caldecott navigates the parallels between the primary liturgical themes of the Apocalypse and the mysteries of the Rosary, showing that both perspectives converge upon the divinisation of the Church at the beatific vision - which corresponds to the Wedding of the Lamb with the Heavenly Jerusalem in Revelation, and the Coronation of the Blessed Virgin in the mysteries of the Rosary.
The book takes a idealist approach to interpreting the text of Revelation (as one would expect from someone within the Christian Platonist tradition), and thus focuses primarily on the theology and cosmology of the Apocalypse. It is therefore somewhat different to my own book on Revelation - which adopts a primarily futurist approach, and would thus make a good complementary text to Unveiling the Apocalypse, to enable the reader to gain a wider perspective on the book as a whole.

As I argue in my own book, the Apocalypse contains several layers of interpretation which are an equally valid approach in their own right. The preterist approach focuses on the original purpose and setting of the Apocalypse within its own cultural milieu, whilst the futurist approach is concerned with the eschatological worldview presented in the book as occurring at the close of history. The historicist approach argues that the Apocalypse communicates to believers in every age of Church history, whilst the idealist approach focuses on the timeless truths and archetypal realities that exist within the self-contained cosmology and theology of Revelation. Caldecott's book therefore covers the latter, more spiritual aspect of the the Apocalypse, with a depth of understanding and eloquence that could emanate only through a true Catholic philosopher.
For those with an interest in the number symbolism of the Book of Revelation, Caldecott is somewhat of a specialist in this area, having devoted years of part-time study to this particular subject (as is evidenced from his earlier works The Seven Sacraments and Beauty for Truth's Sake) and the book contains detailed sections on this subject as well as on the use of gematria in the Apocalypse. His material has been a great influence on the development of my own work. It is therefore quite flattering that he kindly recommends my book for those with an interest exploring the futurist aspects of the Book of Revelation (see here for his comments on Unveiling the Apocalypse on his Beauty in Education blog) - which is an area which he usually has a general distaste for.
Stratford also has a detailed accompanying blog﻿ to All Things Made New which I would recommend - you can find  it here.
Posted by Emmett O'Regan at 16:48

This is very belated note, but thank you for telling other people about Stratford Caldecott's work. We're proud to have published not one, but two of his works. More to come!

No problem! Stratford is a very gifted and intelligent writer, and deserves more attention. I look forward to reading his new material.