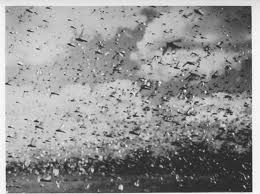 In Unveiling the Apocalypse, I argue that the demonic horde of locusts described in Rev 9 foretold the event of military airplanes and the timing of their first appearance during the First World War.


And the fifth angel blew his trumpet, and I saw a star fallen from heaven to earth, and he was given the key to the shaft of the bottomless pit.  He opened the shaft of the bottomless pit, and from the shaft rose smoke of a great furnace, and the sun and air were darkened from the smoke from the shaft.  Then from the smoke came locusts on the earth, and they were given power like the power of scorpions. In appearance the locusts were like horses prepared for battle: on their heads were what looked like crowns of gold; their faces were like human faces, their hair like women's hair, and their teeth like lions’ teeth; they had breastplates like breastplates of iron, and the noise of their wings was like the noise of many chariots with horses rushing into battle.  They have tails and stings like scorpions, and their power to hurt people for five months is in their tails.  (Rev 9:1-10)


These iron-clad flying creatures of war appear at the first woe of the Apocalypse - which I equate with the First World War. The other two woes are two further world wars - the Second World War, and the world war still to come. Together with the Cold War, these are the wars and rumours of wars mentioned by Jesus in the Gospels that were prophesied to take place before the Great Apostasy (where the love of many would grow cold and Christians would fall away from the faith), and the Second Pentecost (when the Gospel would be spread throughout the world before the coming of the end):


"...you will hear of wars and rumors of wars. See that you are not alarmed, for this must take place, but the end is not yet. For nation will rise against nation, and kingdom against kingdom, and there will be famines and earthquakes in various places. All these are but the beginning of the birth pains.“Then they will deliver you up to tribulation and put you to death, and you will be hated by all nations for my name's sake. And then many will fall away and betray one another and hate one another. And many false prophets will arise and lead many astray. And because lawlessness will be increased, the love of many will grow cold. But the one who endures to the end will be saved. And this gospel of the kingdom will be proclaimed throughout the whole world as a testimony to all nations, and then the end will come." (Matt 24:6-14)


The appearance of the locusts on the earth are announced by a star which falls to earth, which I equate with the Tunguska event in 1908 (since the Tunguska event occurred contemporaneously with the US Signal Corps' commission of the Wright brothers to deliver the world's first military aircraft). As well as having metal plating ("breastplates of iron"), these flying "war horses" have teeth like lion's teeth, which I compare to the Shark's teeth nose art found on aircraft such as the Curtiss P-40 Warhawk: 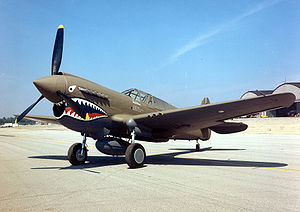 The locusts also have "crowns of gold", which can also be explained by decorative nose art, such as that depicted on the propeller in the image below: 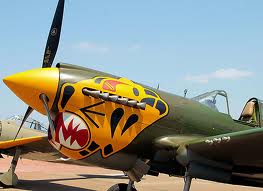 They also have "faces like men's faces", which could be accounted for by the visible face of the pilot in the cockpit. 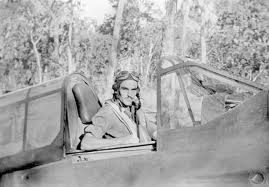 And the hair like women's hair could also be explained by nose art. Petty girls, often depicted with long flowing hair, were one of the most popular form of nose art during the Second World War. 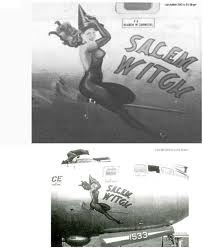 The noise created by these locusts (the sound of many chariots rushing into battle) also pretty accurately describes the sound made by jet engines.
Posted by Emmett O'Regan at 12:39

Email ThisBlogThis!Share to TwitterShare to FacebookShare to Pinterest
Labels: Locusts of the Apocalypse, the Great Apostasy, the Second Pentecost, the three woes

However if you read the passage right before that you see that these locusts were not allowed to kill and those aircrafts sent many to their deaths "They were not given the power to kill them, but only to torture them for five months. And the agony they suffered was like that of the sting of a scorpion when it strikes a man." Rev. 9:5 you cant pick and choose what you want to fit, dont take scripture out of context.

The text states that the locusts would not be allowed to kill anyone for five "months", but only to "torment" them (the Greek word "basanizo" used here implies psychological suffering) - which could suggest that they would be allowed to kill people after this time frame had passed. According to Tyconius' Book of Rules (4th century AD) - one of the oldest books dealing with the interpretation of prophecy, days can be equated with weeks, months or years and vice versa in prophetic texts (e.g. Jeremiah's seventy weeks is reinterpreted as seven weeks of years - 7 x 70 - by the prophet Daniel). So the five months could mean five years in a prophetic sense. If we count five years from the Tunguska event in 1908, we arrive at the year 1913. So after these five years brings us right into 1914 and the outbreak of WWI, when military aircraft were first put to use, and the first deaths by these "locusts" began. So they weren't allowed to kill people for five "months" (equalling years), but after this time period had elapsed, they were permitted to kill.

Dear Sir, I´m sorry but this analysis simply does not fit at all. MANY of the details are awry. The physical description of the locusts does not really fit with airplanes at all, in many details! And besides, most important of all, the locusts are described coming out after the trumpets begin to sound and the huge terrible apocalyptic events of cosmis destruction connected with them. These events themselves come AFTER the "great tribulation" when the Catholic church must be desolated, amidst WW3, as in Fatima visions etc...as you know! But here you imagine that these events are somehow spread accross the 20th century in a gradual way, and only desribe the horros of the world wars etc. I´m sorry but this carries no sense of truth to it at all. But by this, your analysis, of course again, you can lead to a (surely false) conclusion that (anti)pope Francis is the "holy Pope" who will restore the true faith... But many facts contradict this! No Sir, sorry, your website is very good in various respects but your analysis of these aspects is TOTALLY awry... Just because the locusts have "breast plates as of iron" doesn´t make them aeroplanes! With stings in the tail? For five months after a full third of the earth is turned dark? And the mountain being the Tunguska event? No way...no way! These are TINY events compared to the huge cataclysms that John is descibing! Sorry sir, but with respect, your imagination has run away with you here... Stick to the Fatima/La Salette/Garabandal timeline...without changing anything. We are in the time of the last Pope, who must be martyred...THEN the great tribulation and WW3 must occur...then the Warning, Miracle and great Chastisement (3 days of darkness)... And only THEN can the TRUE Holy Pope and Great Monarch restore the true Catholic faith and England Russia, China converts etc...and then only AFTER THAT generation (I think 40 years).. men will forget again and THEN the real Antichrist. false prophet and 7 Trumpet judgements must manifest. Keep to the FACTS of history AND Scripture/divine Catholic prophecy...not your own imaginations...(you can lead people astray!)

This website can live streaming , you can join at my site :
agen judi online terpercaya
Prediksi Bola