Mega-tsunami Update: Recent seismic activity in the Canary Islands - Cause for Alarm? 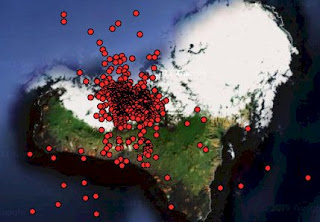 Recent earthquake activity in the Canary island of El Hierro


There has been some fears voiced recently that the "earthquake swarm" centring around El Hierro in the Canary Islands over the past few weeks could boost magmatism in the local vicinity and possibly lead to an eruption at Cumbre Vieja (see here).
Personally I wouldn't worry that an eruption at Cumbre Vieja is imminent. When it does eventually occur, this event will dramatically change the global political landscape, which I argue in the book will create the perfect conditions for the rise to power of the Antichrist. Without the protection of its chief ally, the modern state of Israel will become vastly more vulnerable to the surrounding Arab nations, and an invasion of the Holy Land would be all but inevitable. In Unveiling the Apocalypse, I argue that this event, combined with the influences of the Antichrist, will ultimately lead to the battle of Armageddon - a nuclear conflict that will consume humanity.
Just as Christ brought salvation to the world and reversed the effects of the Fall, the Antichrist will attempt to undo this work by destroying the work of His creation (hence the appellation "destroyer" given for this figure in the Apocalypse). Like Hitler, the Antichrist will rise to power during a time of turmoil, and use his position to bring about the destruction of humanity. But just as Christ was resurrected from the dead after his death on the Cross, so too will humanity be restored to eternal life during the General Resurrection and creation of the new heaven and new earth (cf. Rev 21), which can only take place after the world is destroyed by fire.


But the day of the Lord will come like a thief, and then the heavens will pass away with a roar, and the heavenly bodies will be burned up and dissolved, and the earth and the works that are done on it will be exposed. Since all these things are thus to be dissolved, what sort of people ought you to be in lives of holiness and godliness, waiting for and hastening the coming of the day of God, because of which the heavens will be set on fire and dissolved, and the heavenly bodies will melt as they burn! But according to his promise we are waiting for new heavens and a new earth in which righteousness dwells. (2 Pet 3:10-13).


In the end, the work of the Antichrist is futile - creation is restored anew and dwells forever in the presence of the Lamb, while the Dragon, Beast and False Prophet are consigned to the lake of fire (Rev 20:10).
In the book I argue that the Cumbre Vieja megatsunami is assoiciated with a prophecy attributed to St. Patrick (which can be dated back to the 7th century) that Ireland would suffer from a catacylismic flood seven years before the end of the world:


These are the three prayers of Patrick, as they were delivered to us by the Hibernians, entreating that all should be received on the day of judgment, if we should repent even in the last days of our life.
That he should not be shut up in hell. That barbarian nations should never have the rule over us. That no one shall conquer us, that is the Scots (Scoti was the ancient Latin term for the Irish rather than the Scotish), before seven years previous to the day of judgment, because seven years before the judgment we shall be destroyed in the sea, this is the third. (Tírechán)


However there are a definite set of events that will precede this catastrophe, not least of which is that of the Second Pentecost. The "huge mountain, burning with fire" being thrown into the sea described in Rev 9 and recapitulated again in Rev 16 brings about the downfall of "Babylon" - the last world empire. However before this tulmultous event there will be the grace of the Second Pentecost, which will see one last flourishing of the Catholic faith. Since this spiritual revival has yet to happen, we should feel safe that the threat posed by Cumbre Vieja lies still some way in the future.
Posted by Emmett O'Regan at 19:49

This website can live streaming , you can join at my site :
agen judi online terpercaya
Prediksi Bola