I recently came across a prophecy attributed to St. Elizabeth Ann Seton on Terry Nelson's blog Abbey Roads (see here) which I thought contained some striking parallels with my material on the mark of the Beast. Although we should be wary that the prophecy is another "of unknown origin" type that can't be traced back to a credible source, I thought I should mention it anyway, given this correlation. St. Elizabeth Ann Seton was the first native-born United States citizen to be canonized by the Catholic Church. Born in New York in 1774 to Episcopal parents, Seton eventually converted to Roman Catholicism and established religious communities in Emmitsburg, Maryland. The story that accompanies this prophecy states that Elizabeth Ann was given a vision sometime in the early 1800's which she did not quite understand at the time:


"Every American would have a black box in their home through which the devil would enter.”


Most people believe that this was a prophecy of television, with its seemingly limitless capacity to corrupt susceptible minds. However I believe this imagery calls to mind the Jewish practice of wearing phylacteries, which of course are black boxes worn in accordance with the shema of Deut 6. 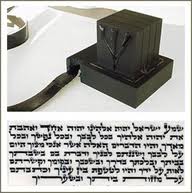 A phylactery (or tefillin) bearing the Hebrew letter shin, which coincidentally (or not...) resembles the letter W in the modern Latin alphabet. 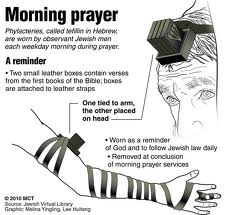 Since the devil is said to enter through this "black box", it would have to be a diabolical inversion of this custom - which is exactly what the mark of the Beast is:


Also it causes all, both small and great, both rich and poor, both free and slave, to be marked on the right hand or the forehead, so that no one can buy or sell unless he has the mark, that is, the name of the beast or the number of its name. (Rev 13:16-17)


Just as the Jews wear phylacteries in a prescribed manner to spell Shaddai - a name for God, with the Hebrew letters shin, daleth and yod; the name of the Antichrist is found in the mark of the Beast (the diabolical phylactery), which bears the number of his name - 666.


So this "black box" through which the devil would enter has some striking similarities with the mark of the Beast. And since phylacteries are worn in the hand or forehead, as is the mark of the Beast, this would suggest that the "black box" is not television (which isn't really box-shaped anymore), but rather some other box-shaped device which is worn in the hand - namely cell phones.


While television has a lot to answer for in the secularisation of culture, we still not fully grasp the impact mobile phones will have on society. Children are certainly more withdrawn when in possession of these devices, preferring to communicate with various "friends" on their cell phones, through either SMS texts or social networking sites, where they often encounter cyber-bullying which has driven countless numbers to suicide. Also, because the internet is uncensored, any children with WAP cell phones are freely able to view any sort of material they wish through these devices, which is all too often obscene and graphic images of sex, violence or degradation which are shared around the school playgrounds (of course this reality is not limited to children, but to adults as well, who often share these images in workplaces for "fun"). There is a lot more freedom for the devil to work with through an uncensored form of media, unlike television, which although secular in nature, is still heavily regulated. What will happen when this future generation comes to power, who are so immersed in the culture of cell phones and the unfettered access to images of cruelty and depravity they provide? De-sensitisation to this material will surely see moral values in further decline from their already sorry state of existence. The devil surely finds the "black box" that is the modern cell phone an easier way of entering our lives. This combined with the fact that mobile phones are set to replace the use of the credit card in the not-too-distant future through the use of NFC technology, and that all such sales will be conducted over the worldwide web - www, which in turn is the numerical equivalent of three sixes in Hebrew, all further suggests we are living in the age of the prophecy of the mark of the Beast.

Email ThisBlogThis!Share to TwitterShare to FacebookShare to Pinterest
Labels: mark of the beast

Congratulations!
I invite you to put this blog the image of the Lady of All Peoples with the prayer taught by her for a fresh outpouring of the Holy Spirit worldwide. Welcome to: www.virgemdeguadalupe.blogspot.com

At Medugorje in early 1986, our Lady purportedly said to turn off the TV.

Its not about cellphones its about the perversion of the phylactery custom that you can find among the muslims.In wich there is a dark spot on their forehead because they pray so hard to hit the ground,its leave a mark on their forehead.When they go protesting the would proudly wear a cloth with the name Allah ontheir head and their right arm.

Medjugorje is a false apparition.
Condemned by Rome.
Our Lady would never say all religions are equal.

Most laptops are black and most radios are black. Most TVs today are black but when they were first starting they were the color of wood. I think the black box is the radio or TV because most people have that instead of the Jewish phylactery.

This sounds similar to the prophecy of the Orthodox St. Cosmas Aitolos: "The time will come when the devil puts himself in a box and starts shouting, and his horns will stick out from the roof-tiles" - obviously TV with the old antennas, either rooftop or (if he meant the roof of the box) "rabbit-ear" antennas.

Heya! I am a relative of St. Elizabeth Ann Seton. The black box is the television.

Medjugorje is not a false apparition and is about to be authenticated by Rome, refer to the Ruini report. Our lady said, "turn off your televisions".

First the radio and then the television? Can anyone cite the source/book/page for the quote about the black box please?

"This sounds similar to the prophecy of the Orthodox St. Cosmas Aitolos: "The time will come when the devil puts himself in a box and starts shouting, and his horns will stick out from the roof-tiles" - obviously TV with the old antennas, either rooftop or (if he meant the roof of the box) "rabbit-ear" antennas."

Another similarity: No one who cites that prophecy from Cosmas Aitolos seems able to say where it was given either!

"Medjugorje is not a false apparition and is about to be authenticated by Rome, refer to the Ruini report. Our lady said, "turn off your televisions"."

Given this comment was given in 2017, the claim they are "about to" do it seems false. It's still unapproved.

And where did the apparition say to turn off televisions? The "anti-TV" ones I know of are listed here:
https://www.medjugorje.ws/en/articles/laureen-emmanuel-watching-tv/

The first is only a suggestion of giving up television in lieu of fasting, and the third was a rule given to a very specific group of people (which nowhere means a global rule than priestly celibacy means everyone must be celibate). The second seems to be what you're referring to (1986)--though that's a while after the original apparitions and thus even if those were true, it doesn't mean this one is. I'm not sure of what its context was, though the site does indicate this was a suggested rule for when fasting, not a general requirement. If it's a general rule, then it would seem you'd have to avoid newspapers also. (in fact, even if it is a general rule, it seems to be against paying attention to news, not against TV in general) Now maybe the context does indicate it's a more general rule, but if so please provide it. (okay, I don't expect an answer from someone who left a comment 3 years ago, but who knows)

"Every American" does not have on of those Jewish Prayer Boxes that you reference.