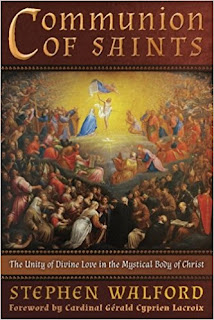 I would like to draw your attention to Stephen Walford's excellent new book Communion of Saints: The Unity of Divine Love in the Mystical Body of Christ. This book is about eschatology in the truest sense of the word, in that it primarily focuses on the de novissimis - the four last things of death, judgment, Heaven and Hell. Walford is a gifted and erudite author, and his latest work on the mystical nature of the Church is quite beautifully written. The fact that Walford's Communion of Saints draws not only on the writings of the popes, but also various saints and doctors of the Church, makes this book an invaluable resource for anyone interested in the subjects of ecclesiology and eschatology.

Of particular interest to both myself and the readers of this blog, the epilogue to Walford's new book contains an excellent survey of the errors perpetuated by the spiritual millenarian movement within Catholicism, which is spearheaded by various influential individuals such as Fr. Joseph Iannuzzi and the popular Catholic evangelist Mark Mallett. Walford presents a detailed critique of Iannuzzi's spiritual millennialism, which erroneously equates the period of peace promised by Our Lady of Fatima with the binding of Satan detailed in chapter 20 of the Apocalypse. By encouraging their followers to do, the spiritual millennialists not only advocate a complete rejection of the eschatology of St. Augustine of Hippo, but also steer their readers into the trap of millenarian heresy, contrary to the teachings of the Catechism:

The Antichrist's deception already begins to take shape in the world every time the claim is made to realize within history that messianic hope which can only be realized beyond history through the eschatological judgement. The Church has rejected even modified forms of this falsification of the kingdom to come under the name of millenarianism, especially the "intrinsically perverse" political form of a secular messianism (CCC 676).

Stephen Walford's book is a great gift to the Church in this time of confusion, and the fact that he boldly throws down the gauntlet to this modern heresy deserves high praise indeed.

Also worth noting is that all proceeds of Communion of Saints goes to Aid to the Church in Need for the persecuted Christians of the Middle East.
Posted by Emmett O'Regan at 14:54

Emmett, I have been reading your work for years and I wanted to ask if you have any experience with Catholicism in the Eastern Church and their communion of Saints?

The Eastern Church isn't in my area of expertise, but I do have a passing knowledge.

Thanks for this, Emmett. I read Mallett in the past, but began to see his eschatology is problematic. He is a good man but his teachings are not accurate on this topic. I'm glad to know about this book.

Thank you so much for this post Emmett, I look forward to the day when an encyclical or papal homily points out this heretical line of thinking. I thank Our Lord and Our Lady that you warned me off of Fr. Iannuzzi's books when I cast the net a little too wide and ordered his books at the very same time as I ordered your first edition and something in me thought to do a Google search to see if you had an online presence and you gave me a pretty strong warning (which I so appreciate) to stay away from his writings. Everything you write Emmett, even the things that at first I don't want to believe because the implications are so frightening for our times, well, they just make too much sense for me, even the purely rational side of me, not to believe. Your writings are a true blessing in my life Emmett and I'm sure in the lives of all your readers. Keep up Our Lord's work!