St. Hildegard and the Flooding of the "Great Nation" 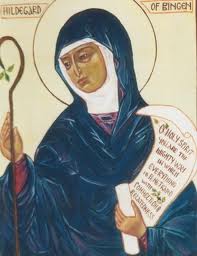 A prophecy attributed to St. Hildegard of Bingen is perhaps the most famous prophecy of a nation being destroyed by tidal waves in private revelation:

Before the comet comes, many nations, the good excepted, will be scourged by want and famine. The great nation in the ocean that is inhabited by people of different tribes and descent will be devastated by earthquake, storm, and tidal wave. It will be divided and, in great part submerged. That nation will also have many misfortunes at sea and lose its colonies. [After the] great comet, the great nation will be devastated by earthquakes, storms and great waves of water, causing much want and plagues. All coastal cities will live in fear, and many of them will be destroyed by tidal waves, and most living creatures will be killed, and even those who escape will die from horrible diseases. For in none of those cities does a person live according to the laws of God.


We should note however that this prediction is most likely of far later origin than St. Hildegard. This prophecy is widely circulated on the internet due to its inclusion by popular books on Catholic prophecy (such as those by Yves Dupont), but there are no solid references in any of these works to the original source of this prophecy amongst St. Hildegard’s vast collection of writings. St. Hildegard was a prolific writer, and her works (which include 9 books and over one hundred letters, as well as 70 poems and 72 songs) have been studied extensively by modern historians. The fact that none of these works are referenced amongst the various websites and books which quote the above prophecy should send alarm bells ringing.

There were many prophecies falsely attributed to St. Hildegard during the later Middle Ages, such as those issued by the anti-mendicant movement. Given the lack of reference to the original source and the inclusion of some anachronistic language, it is likely that the above prophecy is one of these later pseudonymous writings.

This leads us to question whether a pseudonymous prophecy can still offer genuine insight into the future. The Catholic Church teaches that anyone can be recipients of genuine prophecy, regardless of their background - either through interior spiritual vision, or through contact with angelic or demonic forces. Pope Benedict XIV summed up this position in his work Heroic Virtue: On the Beatification and Canonization of the Servants of God:

“The recipients of prophecy may be angels, devils, men, women, children, heathens, or gentiles; nor is it necessary that a man should be gifted with any particular disposition in order to receive the light of prophecy provided his intellect and senses be adapted for making manifest the things which God reveals to him. Though moral goodness is most profitable to a prophet, yet it is not necessary in order to obtain the gift of prophecy.”

We must also take into consideration the fact that the use of pseudonyms to link prophecies to illustrious figures from the past was commonplace in apocalyptic literature from its very inception. The Ethopic and Slavonic Books of Enoch are perhaps the best example of this convention, since we can be certain that these writings did not originate with the antediluvian prophet of Gen 5:24. The tradition of naming prophetic texts after heroic figures of the past can also be found in various other apocalyptic and extra-biblical writings - a collection of works known as the pseudepigraphia. In fact the Book of Revelation is noted for being one of the only instances in apocalyptic literature which does not follow this custom. The author instead gives his own name - John.

The use of a pseudonym to attribute mystical writings to noted authorities from the past was employed to gain immediate recognition for the work at hand, rather than relying on the (perhaps non-existent) reputation of the seers themselves. It was also a way of retaining anonymity and dedicating the work to figures of particular inspiration to the writer. So although the above prophecy drops a considerable amount of prestige regarding its provenance, whether or not it is a genuine oracle of St. Hildegard should not detract from the inherent prophetic ability it may still possess.

Hello Emmett O'Regan, my name is James Duncan. I was wondering if you knew when the 'flooding of the great nation' prophecy attributed to Hildegard first appears in history, do you know which manuscript is first appears in and it's date? what is the earliest reference to it, and by whom? Also, I was wondering if you knew the source and date of the prophecy which is also attributed to hildegard which reads ' There will be no justice then, because the greenness of virtue will have withered. The freshness of the earth will also dry up, because the atmosphere will no longer be pure, as it was originally. Summers will become cold and winters will be hot...No one does what is right and the Church is abandoned' Any feed back would be very appreciated. James.

I've been attempting to find the original source of the "flooding of the great nation" for some time now, to no avail. The earliest reference to it I've found is in Rev. Gerard Culleton's 1941 book "The Prophets and Our Times", but it is almost certainly older than that compilation. I suspect that it could date to any time between the 16th to 19th centuries.
I'm almost certain that the latter prophecy you cite can be found in St. Hildegard's Book of Divine Works, circa 1172.

Thankyou very much, you have helped me a great deal. I appteciate your quick response and the effort you went to to answer my question. Sorry for the late reply. God bless, James

I know this is months late, but in case anyone else is curious, the passage you quote ("all justice entered upon a period of decline...") can be found in Vision Ten:7 from Hildegard's Book of Divine Works.

Thanks for trying to track down the origins of the supposed Hildegard prophecy, Emmett!

The "great" nation is USA.

Sorry, Rogério Maciel, the "great nation" that Hildegard was referring to is Great Britain. Only Britain fulfills Hildegard's criteria for the nation she mentions.

One, the US isn't an island (surrounded by the ocean); but Great Britain is.

Two, the US hasn't lost colonies in the east to a tiger (the national symbol of India) and to a lion (a national animal of China); but Great Britain has.

People need to stop jumping to conclusions and assuming that everything in prophecy is about America.

Is it now.. It is isn't it !? Would you say if you knew . The comet is coming now right in just a few day isn't it ? I keep hearing the saying "he who have ears let them hear " . Why do you say she was speaking about the us when she spoke those words?

It is going to be any day now , the water will rise leaving the ozarks feeling a lot like an island I hear .

I'm not a forecaster formally but I have done the research and I'm afraid , I'm a half a step away from packing up and heading there my self only nothing would feel more like hell then to be stuck on a mountain no matter how beautiful cause itd be with those who would aspire to be like The people who the watch on tv .. I can't live in a world that had no resemblance to the way I think it should be .. It would be real right . It would never feel like home . I would rather be in a cave some where with like minded doomsday prepers like that tesla guy or those guys from Facebook.

*they oops and it *wouldn't be real is what I was trying to say . Anyway I'm kinda freaking out right now .. Someone give me some feed back .. I have charts and all kinds of data but it's not my field Iam feeling like I'm supposed to tell someone ..

I live in southern alberta, and became interested in apocalyptic literature after reading the Cardston Mormon Temple prophecy. I am Catholic, but was intrigued by what this prophecy indicated, the person who received it, and how the area where I have lived most of my life would be like that. I have read a lot of eschatology from different religions. Most are not indicating a positive outcome.

thank you very much