The Fall of Babylon 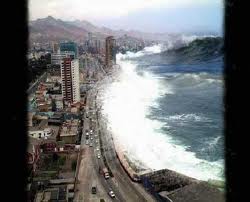 
“Behold, I am against you, O destroying mountain, declares the Lord, which destroys the whole earth; I will stretch out my hand against you, and roll you down from the crags, and make you a burnt mountain. No stone shall be taken from you for a corner and no stone for a foundation, but you shall be a perpetual waste, declares the Lord." (Jer 51:25-26)


"How Babylon is taken, the praise of the whole earth seized! How Babylon has become a horror among the nations! The sea has come up on Babylon; she is covered with its tumultuous waves." (Jer 51:41-42)

The description of the fall of Babylon is perhaps the most detailed single narrative thread of the Book of Revelation. Spread over three chapters, we are told of the rise and fall of this eschatological world empire, and the horror and disbelief of the surrounding nations as they watch its destruction unfold "in a single hour" (Rev 18:10). Above all, it is the earth's merchants that lament its loss, as the abundant riches it poured into their bloated coffers are no more, and the rest of the world is sent spiralling into economic chaos.
As we noted in an earlier post (see here), a common theme in the descriptions of the downfall of Babylon in the Bible is the throwing down of mountains. An angel casts a large mill stone into the sea to demonstrate how Babylon would be thrown down, which intentionally reflects the "huge mountain, burning with fire" being thrown into the sea in Rev 8:9. The falling of mountains is a stock motif in apocalyptic imagery. We can find it for example in the famous verse in Isa 40:4, which describes every mountain being laid low. Jesus brings up this theme during his enacted parable of cursing the fig tree (which represents the withering of Israel, before it is allowed to put forth its leaf once again at the end-time to indicate that "summer is near" cf. Mark 13:28):

Truly, I say to you, whoever says to this mountain, ‘Be taken up and thrown into the sea,’ and does not doubt in his heart, but believes that what he says will come to pass, it will be done for him.
(Mark 11:23)


But we find that has a particular significance in the downfall of Babylon.  For example when we are told that God remembers to punish Babylon for its transgressions after the eschatological earthquake in Rev 16:19, we are immediately given a variation of this theme, where islands flee away, and no mountains are to be found:


The great city was split into three parts, and the cities of the nations fell, and God remembered Babylon the great, to make her drain the cup of the wine of the fury of his wrath. And every island fled away, and no mountains were to be found. (Rev 16:19-20)


In the original Greek of the above text, the word translated as "every" here is actually the Greek word pasa, which means "all", "entire", or "whole" (the Greek word for "every" is kathe), and the word for "island" is used in the singular nesos, rather than plural nesoi. So the above verse is better translated as "And the whole island fled away, and the mountains were not to be found". Translated in this manner, the verse conjures imagery of a lateral collapse such as that which is expected to occur at Cumbre Vieja.
The Apocalypse borrows imagery from various OT sources in its depiction of the fall of Babylon, and is particularly reliant upon chapter 51 of the Book of Jeremiah in this instance. As we can see above, Jer 51:42 curiously describes the landlocked ancient city of Babylon as being destroyed by the sea. The author of the Book of Revelation seems to perceive that these words of Jeremiah transcend their immediate context, and foreshadow events to come at the end of the age. A destroying mountain which "destroys the whole earth" becomes a burning mountain which is rolled down from the crags (the original Hebrew word "serepah" used here also allows the present participle "burning", and it is translated as such in the Recovery Version of the Bible: "Indeed, I am against you, O mountain of destruction, Declares Jehovah, Which destroys the whole earth; And I will stretch out My hand upon you And roll you down from the rocks And make you a burning mountain.").
Shortly after in the same chapter, we are told that Babylon is covered by the sea, in Jer 51:42 (quoted above), and again in Jer 51:54-56:


“A voice! A cry from Babylon! The noise of great destruction from the land of the Chaldeans!
For the LORD is laying Babylon waste and stilling her mighty voice. Their waves roar like many waters; the noise of their voice is raised, for a destroyer has come upon her, upon Babylon..."


Then again shortly thereafter, Jeremiah instructs his messenger Seraiah to physically enact a prophecy on his approach to Babylon which is highly reminiscent of the angel casting the millstone into the sea in Rev 18:21:


"When you finish reading this book, tie a stone to it and cast it into the midst of the Euphrates, and say, ‘Thus shall Babylon sink, to rise no more, because of the disaster that I am bringing upon her..." (Jer 51:63-64)


These various biblical images of mountains being cast into the sea strongly resemble the computer models developed in consultation with the geophysicists behind the Canary Island mega-tsunami hypothesis, such as we can see in the video below:


It is interesting to note that in a later article issued to defend their findings in the face of some objections to the extent of the predicted collapse of Cumbre Vieja, Ward and Day together with supporting geophyicists Bill McGuire and Christopher Kilburn stated that if anything, their original estimates were conservative (McGuire, B; Day, S; Kilburn, C; Ward, S.N. “Volcano collapse-generated megatsunamis: Fact or Fiction?”. See the full article here). So the projected devastating effects of this unparalleled disaster could be even worse than that presented in the above documentary.

It is also interesting to note that the "funeral dirge" of Babylon described in Rev 18 is based on the destruction of the Phoenician city of Tyre by the sea foretold in Ezek 27:

“Your rowers have brought you out into the high seas. The east wind has wrecked you in the heart of the seas. Your riches, your wares, your merchandise, your mariners and your pilots, your caulkers, your dealers in merchandise, and all your men of war who are in you, with all your crew that is in your midst, sink into the heart of the seas on the day of your fall. At the sound of the cry of your pilots the countryside shakes, and down from their ships come all who handle the oar. The mariners and all the pilots of the sea stand on the land and shout aloud over you and cry out bitterly. They cast dust on their heads and wallow in ashes; they make themselves bald for you and put sackcloth on their waist, and they weep over you in bitterness of soul, with bitter mourning. In their wailing they raise a lamentation for you and lament over you: ‘Who is like Tyre, like one destroyed in the midst of the sea? When your wares came from the seas, you satisfied many peoples; with your abundant wealth and merchandise you enriched the kings of the earth. Now you are wrecked by the seas, in the depths of the waters; your merchandise and all your crew in your midst have sunk with you. All the inhabitants of the coastlands are appalled at you, and the hair of their kings bristles with horror; their faces are convulsed. The merchants among the peoples hiss at you; you have come to a dreadful end and shall be no more forever.’” (Ezek 27:26-36)

The fact that this passage is alluded to in the Apocalypse again suggests that it transcends its immediate context and gives us a glimpse of events unfolding at the end-time. Compare the above passage with Rev 18:

They will stand far off, in fear of her torment, and say, “Alas! Alas! You great city, you mighty city, Babylon! For in a single hour your judgment has come.”And the merchants of the earth weep and mourn for her, since no one buys their cargo anymore, cargo of gold, silver, jewels, pearls, fine linen, purple cloth, silk, scarlet cloth, all kinds of scented wood, all kinds of articles of ivory, all kinds of articles of costly wood, bronze, iron and marble, cinnamon, spice, incense, myrrh, frankincense, wine, oil, fine flour, wheat, cattle and sheep, horses and chariots, and slaves, that is, human souls. “The fruit for which your soul longed has gone from you, and all your delicacies and your splendors are lost to you, never to be found again!” The merchants of these wares, who gained wealth from her, will stand far off, in fear of her torment, weeping and mourning aloud, “Alas, alas, for the great city that was clothed in fine linen, in purple and scarlet, adorned with gold, with jewels, and with pearls! For in a single hour all this wealth has been laid waste.” And all shipmasters and seafaring men, sailors and all whose trade is on the sea, stood far off and cried out as they saw the smoke of her burning, “What city was like the great city?” And they threw dust on their heads as they wept and mourned, crying out, “Alas, alas, for the great city where all who had ships at sea grew rich by her wealth! For in a single hour she has been laid waste. (Rev 18:10-19)

The fact that the author of the Apocalypse based the lamentation over the fall of the eschatological "Babylon" on this account in Ezekiel suggests that we should look to this text to find supplementary material to compliment the account given in Rev 18. When we do so, we find that the means of the downfall of Tyre - that it would be destroyed by the sea, is the most notable complimentary addition we can make. Taken together with the description of the angel casting the millstone into the sea in Rev 18:21 saying: “So will Babylon the great city be thrown down with violence, and will be found no more” (Rev 18:21), therefore strongly suggests that "destruction by sea" is the most significant theme to be gleaned from both texts.
Posted by Emmett O'Regan at 12:14

Email ThisBlogThis!Share to TwitterShare to FacebookShare to Pinterest
Labels: megatsunami, the eschatological earthquake

Hi, and welcome to the Catholic Blog Directory. I'd like to invite you to participate in Sunday Snippets--A Catholic Carnival, a weekly gathering in which Catholic bloggers share their best posts with each other. This week's host post is at http://rannthisthat.blogspot.com/2011/10/sunday-snippets-catholic-carnival_08.htmlzuksi