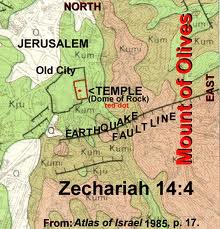 As we have already discussed previously, there are numerous links throughout Scripture with the Second Coming, eschatologlical earthquake and the destruction of the eschatological empire referred to as "Babylon". These various connections appear to indicate that this earthquake is in some way responsible for the downfall of "Babylon" - the ruling world power at the end-time (see the earlier post on The Eschatological Earthquake), which in turn leads us to question how this could be possible.  As I have argued before throughout this blog and in my book Unveiling the Apocalypse: Prophecy in Catholic Tradition, the Bible repeatedly states that the this "empire" will be destroyed by a burning mountain being thrown into the sea (see the earlier post The Casting Down of Mountains for a comprehensive list of Scripture passages connected to this event). The volcano Cumbre Vieja in the Canary Islands presents just such a threat to the east coast of the Americas, which scientists warn could collapse into the Atlantic during its next eruption, producing a "mega-tsunami" that will obliterate the various cities of the eastern seaboard (see Mega-tsunami). But what possible association could there be between this eschatological earthquake and the eruption of Cumbre Vieja?
Recently, the combined research of various geophysicists around the world has shown that large earthquakes can trigger volcanic eruptions:


Scientists using NASA satellite data have found strong evidence that a major earthquake can lead to a nearly immediate increase in regional volcanic activity. The intensity of two ongoing volcanic eruptions on Indonesia's Java Island increased sharply three days following a powerful, 6.4-magnitude earthquake on the island in May 2006. The increased volcanic activity persisted for about nine days.
"During this period, we found clear evidence that the earthquake caused both volcanoes to release greater amounts of heat, and lava emission surged to two to three times higher than prior to the tremor," said study lead author Andrew Harris, University of Hawaii, Honolulu. The research was recently published in the American Geophysical Union's Geophysical Research Letters.
While scientists have long debated whether earthquakes can trigger new volcanic eruptions, this study linked an earthquake to enhanced volcanic activity at two ongoing eruptions that were being closely monitored by satellite-based sensors on a daily basis.
ScienceDaily (Apr. 10, 2007)


Volcanic activity in the Canary Islands is affected by the movement of the African tectonic plate, and it is thought that a smaller fault line runs through the islands, which act as a vent during times of major seismic activity, allowing magma to escape to the earth’s surface. Think of shaking a can of soda then dropping it on stony ground – the increased pressure within will cause the agitated liquid to sprout out from the weakest point in the can.
We can gain some insight into volcanic activity in the Canary Islands by examining the latest eruptions at El Hierro, which are still ongoing. The increased magmatism below the Canary Islands appears to be related to the 5.2 magnitude earthquake in Spain on May 11th 2011, which hit the town of Lorca. A 4.7 magnitude earthquake struck the Canaries the day after, at El Hierro on May 12th. The Lorca earthquake occurred along the fault line that is associated with volcanic activity in the Canaries. 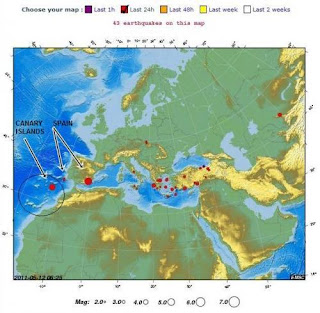 The above diagram shows the seismic activity along the North African and South Eurasian fault lines in a 24-hour period between May 11th – 12th in 2011. The recent volcanic activity at El Hierro is thus produced by the movement of the African tectonic plate, and is symptomatic of the wider seismic activity along this faultline, which in addition to the Lorca earthquake in Spain, has also produced the recent earthquakes in Turkey. 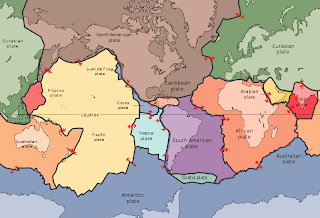 As we can see from the diagrams above, the land of Israel is situated between the dividing fault lines of the African, Eurasian and Arabian plates. So if there was a major earthquake centred on Jerusalem (which the Book of Revelation predicts will be the greatest earthquake known to human civilisation) caused by the shifting of the African plate, this could create a surge of magma across the entire faultline that would seek to escape through the volcanic vents on the Canary Islands, thus setting in motion a chain of events that would cause the collapse of Cumbre Vieja, and consequently see the destruction of the east coast of the Americas.


The seventh angel poured out his bowl into the air, and a loud voice came out of the temple, from the throne, saying, “It is done!” And there were flashes of lightning, rumblings, peals of thunder, and a great earthquake such as there had never been since man was on the earth, so great was that earthquake. The great city was split into three parts, and the cities of the nations fell, and God remembered Babylon the great, to make her drain the cup of the wine of the fury of his wrath. And every island fled away, and no mountains were to be found. (Rev 16:17-20)


Jerusalem is situated on the Jordan Rift Valley - home of the Dead Sea and the lowest land elevation on earth, which is an area of intense seismic activity, and recent research by the Geological Survey of Israel has shown that the Old City is most at risk from any future earthquakes:


Researchers used computers to map Jerusalem's topography, geology, soil and the Old City's subterranean labyrinth of cisterns and tunnels. Most at risk, the report says, is the Old City and the 11-acre elevated plaza housing two major mosques, including the gold-capped Dome of the Rock...
About half a dozen major earthquakes have hit the city over the last thousand years, Bein said, and archaeologists have found evidence of the damage. The last big earthquake in the area was in 1927, when a magnitude 6.3 quake centered near Jericho, about 15 miles to the east of Jerusalem, killed more than 200 people...
Some Israeli scientists have warned that another major earthquake appears likely to strike the Holy Land in the next 50 years.
The Great Rift Valley runs for 3,000 miles between Syria and Mozambique and passes through the Dead Sea, below Jerusalem's eastern hills. The fault line was caused by the separation of African and Eurasian tectonic plates 35 million years ago, a split that weakened the Earth's crust.
About 35 miles to the north, another fault line cuts the land east to west from the Mediterranean port of Haifa with the West Bank towns of Jenin and Nablus before reaching the Jordan River.
"This is a very active area which may produce a large earthquake once in a while," Bein said.
Two weeks ago, a small 3.7 magnitude earthquake was measured in the Dead Sea region but caused no damage.
The Bible recounts a number of earthquakes here. Some scholars reckon a quake may have been behind the shower of brimstone and fire that engulfed Sodom and Gomorrah. (by Jason Keyser, Associated Press, 2004 see the full article here)

Email ThisBlogThis!Share to TwitterShare to FacebookShare to Pinterest
Labels: megatsunami, the eschatological earthquake

Would you please explain these verses:
"It shall come to pass in the last days that the mountain of the LORD's house shall be established in the top of the mountains." Isaiah 2:2-4.

People aren't going to have to trudge up Mt Everest to talk with the LORD are they? sometimes I feel like I'm trudging it daily.

That passage is related to the descent of the Heavenly Jerusalem described in Rev 21. This is a deeply allegorical passage which concerns the perfection of the Church during the Second Pentecost, when the Bride makes itself ready for the coming of the Groom. The Heavenly Jerusalem/Church being placed on top of the mountains symbolizes it eventually assuming its rightful position as the most influential institution on earth.

I would not trust this source. The earth 35 million years old ? Not so. The earth is not even 10,000 years old. Peace be with you.