Mega-tsunami Prophecies in the Book of Ezekiel? 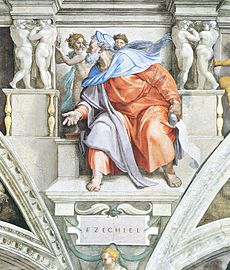 The prophet Ezekiel, by Michelangelo in the Sistine Chapel


As we have already partially discussed in a previous post, the Book of Ezekiel also appears to predict the destruction of a kingdom by massive coastal flooding at the end-time. But there is another passage in Ezekiel which specifically links this event with the battle of Armageddon. Before we go on to discuss the important passage which connects the eschatological earthquake and collapse of mountains with the battle of Armageddon, we'll first recap the other material in the Book of Ezek which prophesies this event - specifically Ezek 26 and the announcement of the destruction of Tyre - a passage which is closely connected to the description of the fall of Babylon in the Book of Revelation:


...therefore thus says the Lord GOD: Behold, I am against you, O Tyre, and will bring up many nations against you, as the sea brings up its waves. They shall destroy the walls of Tyre and break down her towers, and I will scrape her soil from her and make her a bare rock. She shall be in the midst of the sea a place for the spreading of nets, for I have spoken, declares the Lord GOD...
(Ezek 26:3-6)

And they will raise a lamentation over you and say to you,“‘How you have perished, you who were inhabited from the seas, O city renowned, who was mighty on the sea; she and her inhabitants imposed their terror on all her inhabitants! Now the coastlands tremble on the day of your fall, and the coastlands that are on the sea are dismayed at your passing.’
“For thus says the Lord GOD: When I make you a city laid waste, like the cities that are not inhabited, when I bring up the deep over you, and the great waters cover you, then I will make you go down with those who go down to the pit, to the people of old, and I will make you to dwell in the world below, among ruins from of old, with those who go down to the pit, so that you will not be inhabited; but I will set beauty in the land of the living. I will bring you to a dreadful end, and you shall be no more. Though you be sought for, you will never be found again, declares the Lord GOD.”
(Ezek 26:17-21)

This passage in the Book of Ezekiel is often highlighted by critical scholars as a prime example of a "failed prophecy", since Tyre withstood the seige laid against it by King Nebuchadnezzar of Babylon in the 6th century BC - which ended in a comprimise. However the fact that Rev 18 bases much of its details concerning the fall of Babylon on this portion of Ezekiel suggests that it has a futurist layer of interpretation:

And they threw dust on their heads as they wept and mourned, crying out, “Alas, alas, for the great city where all who had ships at sea grew rich by her wealth! For in a single hour she has been laid waste. Rejoice over her, O heaven, and you saints and apostles and prophets, for God has given judgment for you against her!” Then a mighty angel took up a stone like a great millstone and threw it into the sea, saying, “So will Babylon the great city be thrown down with violence, and will be found no more...
(Rev 18:19-21)


Could Ezekiel's prophecy of the destruction of Tyre in the sea have been based on an eschatological vision of the devastation of a future nation, which the prophet symbolically saw as a nation in his own day? The same nation St. John refers to as "Babylon" in the Book of Revelation? The prophet Ezekiel used metaphorical language to describe Nebuchadnezzar's sack of Tyre, comparing the attacking armies to tidal waves engulfing the city, which was an important port on the Mediterranean trade routes. Is it possible that this metaphor looks beyond the immediate context of the seige of Tyre by Nebuchadnezzar (which ended peaceably) to the future destruction of a nation by the sea in the eschatological age? The use of the typology of Ezek 26 by the Book of Revelation certainly suggests that this is the case. The Bible often gives cities symbolic names in order make an association with shared thematic properties. For example the name of the city in which the Two Witnesses of Rev 11 are martyred is symbolically referred to as "Egypt" and "Sodom", because God caused a hail of fire to rain down on both of these locations:


And when they have finished their testimony, the beast that rises from the bottomless pit will make war on them and conquer them and kill them, and their dead bodies will lie in the street of the great city that symbolically is called Sodom and Egypt, where their Lord was crucified.
(Rev 11:7-8)

Then the LORD rained on Sodom and Gomorrah sulfur and fire from the LORD out of heaven. And he overthrew those cities, and all the valley, and all the inhabitants of the cities, and what grew on the ground. But Lot's wife, behind him, looked back, and she became a pillar of salt.
And Abraham went early in the morning to the place where he had stood before the LORD. And he looked down toward Sodom and Gomorrah and toward all the land of the valley, and he looked and, behold, the smoke of the land went up like the smoke of a furnace.
(Gen 19:24-28)


Compare the above passages with the description of gathering of the forces of Gog and Magog around "the camp of the saints and the beloved city" in Rev 20, which are also destroyed by fire falling from the sky:


And when the thousand years are ended, Satan will be released from his prison and will come out to deceive the nations that are at the four corners of the earth, Gog and Magog, to gather them for battle; their number is like the sand of the sea. And they marched up over the broad plain of the earth and surrounded the camp of the saints and the beloved city, but fire came down from heaven and consumed them... (Rev 20:7-9)


The above attack of "the beloved city" by Gog and Magog is a direct allusion to Ezek 38-39, and recapitulates the battle of Armageddon described in Rev 16:14-16 and 19:19. This passage would then correspond to the place "where their Lord was crucified" in Rev 11:8 above.


We can find a passage closely related to Ezekiel's pronouncement of judgment upon Tyre in chapter 23 of the Book of Isaiah, which also issues an oracle prophesying the destruction of Tyre and Sidon. And again we find the a metaphor of the sea coming against this maritime city, which is listed amongst the strongholds of Canaan:


He has stretched out his hand over the sea; he has shaken the kingdoms; the LORD has given command concerning Canaan to destroy its strongholds.  (Isa 23:11)


The Book of Revelation also draws inspiration from this oracle against Tyre in Isaiah for its depiction of the whore of Babylon, and how the harlot-city will be repaid double for its sins:


Compare this passage with the relevant portion of the Apocalypse below:


Then I heard another voice from heaven saying, “Come out of her, my people, lest you take part in her sins, lest you share in her plagues; for her sins are heaped high as heaven, and God has remembered her iniquities. Pay her back as she herself has paid back others, and repay her double for her deeds; mix a double portion for her in the cup she mixed. (Rev 18:4-6)


So the Book of Revelation  undoubtedly bases its portrayal of the whore of Babylon on the metaphorical destruction of Tyre in the sea described in Ezekiel and Isaiah.
Perhaps even more importantly however is a later passage in Ezekiel which directly connects the eschatological earthquake and the throwing down of mountains with the onslaught of the battle of Armageddon:


But on that day, the day that Gog shall come against the land of Israel, declares the Lord GOD, my wrath will be roused in my anger. For in my jealousy and in my blazing wrath I declare, On that day there shall be a great earthquake in the land of Israel. The fish of the sea and the birds of the heavens and the beasts of the field and all creeping things that creep on the ground, and all the people who are on the face of the earth, shall quake at my presence. And the mountains shall be thrown down, and the cliffs shall fall, and every wall shall tumble to the ground. I will summon a sword against Gog on all my mountains, declares the Lord GOD. Every man's sword will be against his brother. With pestilence and bloodshed I will enter into judgment with him, and I will rain upon him and his hordes and the many peoples who are with him torrential rains and hailstones, fire and sulfur. So I will show my greatness and my holiness and make myself known in the eyes of many nations. Then they will know that I am the LORD.
(Ezek 38:18-23)


This passage helps to compliment its equivalent section in the Apocalypse, and gives a few additions which help to flesh out a fuller picture of this event:

The seventh angel poured out his bowl into the air, and a loud voice came out of the temple, from the throne, saying, “It is done!” And there were flashes of lightning, rumblings, peals of thunder, and a great earthquake such as there had never been since man was on the earth, so great was that earthquake. The great city was split into three parts, and the cities of the nations fell, and God remembered Babylon the great, to make her drain the cup of the wine of the fury of his wrath. And every island fled away, and no mountains were to be found. And great hailstones, about one hundred pounds each, fell from heaven on people; and they cursed God for the plague of the hail, because the plague was so severe.
(Rev 16:17-21)

Whilst the Book of Revelation moves directly from the collapsing (or "fleeing") of mountains to the plague of hail and fire falling from the sky, the Book of Ezekiel gives us a further insight into this passage by showing that it is the battle of Armageddon - Gog and Magog, that will cause fire to come down from heaven to consume the enemies of God.


See also the related posts:
Mega-tsunami
The Fall of Babylon
The Casting Down of Mountains

Email ThisBlogThis!Share to TwitterShare to FacebookShare to Pinterest
Labels: megatsunami

I truly believe that this will happen during this year of 2012.