Our Lady of Egypt 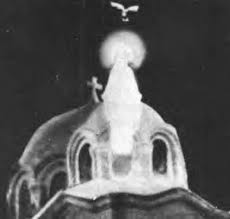 The visions of Our Lady in Egypt that took place between the years 1968-2009 are the undoubtedly the most widely witnessed Marian apparitions in history.  The numbers of those who have witnessed these events are estimated to be in the millions, and unlike the other great Marian apparitions, these visions belong to a category known in Catholic theology as visio sensibilis - i.e. they are an actual physical manifestation.  This is distinguished from the common class of visions known as visio imaginativa - where the apparitions are visible only to the seers themselves (like Fatima, Lourdes, etc.). Cardinal Bertone, the former secretary of the Congregation for the Doctrine of the Faith and current Vatican secretary of state, lists the apparitions at Zeitoun as one of the very few modern apparitions officially recognized as authentic by the Catholic Church (See Bertone, T. The Last Secret of Fatima pp10-11).


And a great sign appeared in heaven: a woman clothed with the sun, with the moon under her feet, and on her head a crown of twelve stars. She was pregnant and was crying out in birth pains and the agony of giving birth. And another sign appeared in heaven: behold, a great red dragon, with seven heads and ten horns, and on his heads seven diadems. His tail swept down a third of the stars of heaven and cast them to the earth. And the dragon stood before the woman who was about to give birth, so that when she bore her child he might devour it. She gave birth to a male child, one who is to rule all the nations with a rod of iron, but her child was caught up to God and to his throne, and the woman fled into the wilderness, where she has a place prepared by God, in which she is to be nourished for 1,260 days. (Rev 12:1-6)


Chapter 12 of the Apocalypse is undoubtedly an apocalyptic retelling of the story of the nativity. The account of the Woman adorned with the Sun tells how she is with child and pursued by the Dragon intent on destroying her offspring, but the Woman escapes into the desert where she finds refuge for 1,260 days or three and a half years.  This scene is obvioiusly based on the events of the nativity, where the Holy Family is forced to flee into Egypt in order to escape from King Herod, who seeking to destroy his potential usurper orders the slaugther of the Holy Innocents.  The "three and a half years" may then give a date for Jesus' birth in 7BC (which would be in line with the triple conjunction of Jupiter and Saturn hypothesis for the Star of Bethlehem, since this event occurred in that year), and this time period would have ended in 4BC at the death of King Herod.


The modern apparitions of Our Lady in Egypt (which are those of Zeitoun from 1968-1971; Shobura from 1986-1991, Assiut from 2000-2001 and Warraq in 2009) have all occurred at places which are traditionally associated with the flight of the Holy Family into Egypt.  The apparitions took place over Coptic Churches whose names also seem to be of some significance.  Those of  Zeitoun occurred over a Church dedicated to St Mary herself, whilst those of Assiut took place over St Mark's - and it has been noted that the original apparitions which began in April 1968 coincided with the return of the relics of St Mark (who is the patron saint of Egypt) by Pope Paul VI to Alexandria (see here).  Those at Shoubra appeared over a church dedicated to St. Demiana - who in another "slaugther of the innocents" was massacared along with 40 other martyr-virgins during the persecution under Diocletian (see here).  Perhaps most tellingly, is the most recent appearances of Our Lady over the church dedicated to the Virgin Mary and Archangel Michael at Warraq in 2009.  The only place in Scripture that links the Virgin with the Archangel Michael is in Rev 12.


Above: Footage of the apparition at Warraq captured in 2009


If the apparitions in Egypt are connected with the prophecy of the Woman adorned with the Sun in Rev 12, then it would seem that their timing communicates the most important message in this regard.  By combining Rev 12 with the story of the nativity, we know that the Woman adorned with the Sun is forced to flee into the desert because the Dragon, intent on destroying her Child, instigates the slaughter of the Holy Innocents.  The event of the slaughter of the innocents was the primary reason for the flight of the Holy Family into Egypt.  It appears that a modern "slaughter of the innocents" may also have been the primary cause for this heavenly re-enactment of the flight into Egypt.  The apparitions in Zeitoun first began in April 1968 - the exact month when the Abortion Act came into effect in the UK (see here), which paved the way for the legalisation of abortion throughout the world.  Did the appearances of Our Lady at Zeitoun herald the arrival of a new "slaughter of the innocents" in the legalisation of abortion?


See also the related posts:
The Woman Adorned with the Sun
Our Lady of Assiut
Our Lady appears in Egypt again
The Fall of Satan
The Year of the Dragon
Signs in the Sky
Posted by Emmett O'Regan at 12:33

Email ThisBlogThis!Share to TwitterShare to FacebookShare to Pinterest
Labels: marian apparitions in Egypt, Our Lady of Assiut, Our Lady of Warraq, Our Lady of Zeitoun, the Woman adorned with the Sun

I believe you are right about the evil of abortion being related to the Marian apparitions in Egypt. However, I think it is even more profound. Instead of "A voice in Rama was heard, lamentation and great mourning; Rachel bewailing her children, and would not be comforted, because they are not..." Matthew 2:18, we have an acceptance of the murder of the innocents, a celebration of it in the modern world, many tout it is the "liberation" of women. Does this not bring to mind: "And because iniquity hath abounded, the charity of many shall grow cold..." Matthew 24:12 ?

Thanks for the link! I think I posted some of those videos up on the article concerning these recent apparitions ("Our Lady Appears in Egypt Again"): http://unveilingtheapocalypse.blogspot.com/2011/10/our-lady-appears-in-egypt-again.html.
There are some early reports that witnesses believe that the archangel Michael accompanied Our Lady during these recent apparitions, but these accounts are as of yet unconfirmed. If they can be verified, it would go a long way to further bolster my arguement that these apparitions are related to the narrative of the Woman adorned with the Sun in Rev 12, which also predominately features St. Michael.

Perhaps this needs updating in view of recent events.
Our Lady's possible appearances in Medjugorge were prior to a trial by civil war (which she mentioned) and seemed fantastic to me at the time prior to the fall of the iron curtain.
Is there a parrallel in Egypt?