St Malachy's Prophecy of the Glory of the Olives 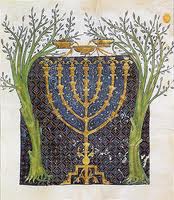 According to the "prophecy of the popes" attributed to St. Malachy, the current pontiff, Pope Benedict XVI, is the second to last pope before the end of the world. Although the prophetic list of popes is attibuted to the 12th century Irish saint Maelmhaedhoc Ó Morgair (Malachy), it is much more likely that they are a pseudonymous work dating from the late 16th century. Despite the nature of its origin however, the list of popes has still proved to have been strikingly accurate in a large number of cases since it's initial publication in 1595 - particularly throughout the course of the 20th century (see here for the list of popes).  The motto Pope John Paul II, for example is De labore solis - "From the labour of the Sun". This was particularly apt for this beloved pope, as John Paul II was both born and buried under a partial solar eclipse.  This motto also recalls the passage in Rev 12 concerning the Woman adorned with the Sun:


And a great sign appeared in heaven: a woman clothed with the sun, with the moon under her feet, and on her head a crown of twelve stars. She was pregnant and was crying out in birth pains and the agony of giving birth.  (Rev 12:1-2)


The Latin phrase De labore solis is a common idiom for a solar eclipse, but it also echoes the above passage in the Apocalypse, where the Woman is in the pains of childbirth. Did this motto predict that the prophecy of the Woman adorned with the Sun and the "war in heaven" would take place during the pontificate of this pope?
The motto in St. Malachy's Prophecy of the Popes relating to Benedict XVI is Gloria olivae - "glory of the olives". Many feel that this prophecy was fulfilled in the pope's choice of regnal title Benedict, as St. Benedict is associated with a branch of Benedictines called the Olivetans. However the mottoes in the Prophecy of the Popes become increasingly eschatological in character towards the end of the list, and it may be that we should look for a fulfillment of this prophecy in the Apocalypse. The title Gloria olivae recalls the passage in Rev 11 associated with the Two Witnesses:


These are the two olive trees and the two lampstands that stand before the Lord of the earth.
(Rev 11:4)


If the prophecy of the Two Witnesses in the Book of Revelation is associated with the martyr-pope or angelic pope of Catholic prophecy, then this motto found in the Prophecy of the Popes could provide a bridging connection which identifies Benedict XVI as the martyr-pope of the Third Secret who helps to establish the Second Pentecost.

Following the announcement of Pope Benedict XVI's resignation on 11th Feb, 2013, it appears that this event could be related to the Worthy Shepherd Prophecy - which predicts that the Angelic Pope would ascend the papacy by "about twelve years shall the millennium have passed". If the Worthy Shepherd Prophecy is legitimate, then the motto associated with Benedict XVI - "glory of the olives" could perhaps point to something that would emerge during the lifetime of this particular pope. The choice of motto often points to events which occur in the relevant pontiff's reign. For example, the motto given to Benedict XV (r.1914-1922) was religio depopulata (religion depopulated). This was particularly apt, since this Pope took office at the beginning of World War I, and would see the rise of the militantly atheistic Soviet Union.
The motto "glory of the olives" could perhaps mean that Pope Benedict XVI would live to see the "glory of the olives" or one of the Two Witnesses of Rev 11 be elected as pope, and that this would be the Worthy Shepherd/Angelic Pope prophesied by Bl. Tomasuccio de Foligno. If so, then it would seem that the next pope could be identified as the martyr-pope of Catholic prophecy.

The Two Witnesses
The Great Monarch
The Angelic Pope

Email ThisBlogThis!Share to TwitterShare to FacebookShare to Pinterest
Labels: the martyr pope, the Two Witnesses

Having been aware of the various prophecies about the so-called "Great Monarch" for over thirty years, it has dawned on me that the only "Great Monarch" we need to be anticipating and preparing for is Jesus Christ, Our King, Who is our "great minister" inasmuch as He has already earned that title of His service to us through His life, death and resurrection, that is, God meeting us on our common ground as a human and by living by His Own criteria for defining "great". Matthew 20:26,27.

Secondly, I have a sense that when Elijah or whoever returns to "restore all things" he will do so employing the criteria of the Holy Scriptures and not the traditions of the clergy, i.e. it will not be a return to the Latin Mass and other such matters which really achieve little more than providing nostalgic effects and not truly spiritually edifying benefits.

The forgotten "mystery of God and Christ" which entails the means to restore all things to the will, plan and teachings of God/Christ (that is, man's originally intended dominion of the earth with God) will "likely" be a key to such restoration, for thereof all things are used and employed in accord with and manifesting God's will.

This warrants that men will be met with God's plan on their ground of cultural commonality, such as through the vernacular and not through Latin, which was a long-lasting mistake on the part of the clergy and missionaries who unrealistically expected Indians and other natives of pagan nations to relate to the worship of God.

(Contrary to Catholic belief, clergy/men in error ONLY when they are molesting children, but there are other areas in which they have blundered and continue to do so. But we are all sinners.)

Jesuit missionary Mateo Ricci was one of the few of history who recognized and employed this tactical strategy of God and Christ and tried to evangelize the Chinese through their interests in the sciences as well as meeting them on their religious grounds with the commonality of praying to saints on parallel to their ancestor "worship", which is a misnomer or misapplied term:

However, the "holy Shepherd" at that time, lacking the vision of the "mystery of God and Christ" (that is, simply put, he did not know or value the tactical strategy of employing cultural and human experiential expressions to meet men on their ground of need for God and His will,) completely, VERY unwisely, permanently and irreparably undermined Ricci's efforts:

The successor Shepherd attempted to make what proved to be a futile effort to back-peddle to save face for the papacy: It all resulted in the catastrophic, centuries long loss of the nation of China to continuing paganism and then communism to this day now devolving into "unbridled capitalistic materialism."

So that of the tactical strategy of meeting people where they are (with God's Word and rule concerning the Kingdom of God toward restoration), IN their cultural terms (as did St. Patrick, and consider his success) but not ON their lack of moral terms, we should see the Scripture-based Protestants receptive to a return to the Catholic Church when we obey Jesus Who taught "Call no man Father; One in heaven is your Father".

That is, they will see Catholics finally being universally obedient to Jesus and the Word, and then they will realize again the benefit of the Sacraments which yield the pattern of the mystery of God and Christ as well to the laity; so that we will recognize how it is that we are all spiritual rulers of the earth (of our right motives), that is, that we all comprise Jehovah-God's "kingdom of priests" which Catholic clergy have for too long monopolized to themselves, giving but lip service to "the priesthood of the laity".

It would not hurt us to consider pursuing these things toward at least preparing for future events. Preparation is what it is all about.