The Year of the Dragon 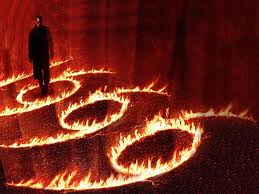 The turn of the millennium was accorded a great deal of importance by a number of various seers and visionaries.  A considerable amount of prophecies foretold that this date was of special significance.  The original 1846 version of the Secrets of La Salette (which was recently found and published for the first time in 2002) for example, predicted that "a monster will come to disturb the peace" and that this would happen by "the year two thousand at the latest" (see here).   And we have already noted Fr Gobbi's prediction that this time period would see the implementation of the prophecy of the "mark" of the Beast, and that the door would be opened for the appearance of the Antichrist.

There is also "the elephant in the room" which is Nostradamus' 1999 prophecy.  While the manner in which Nostradamus received his visions was extremely heterodox, and I would normally discourage Catholics from paying any attention to them, it would be ludicrous to gloss over this prophecy given the level of its fame.  Pope Benedict XIV summed up the Church's position on prophecy in his work  Heroic Virtue: On the Beatification and Canonization of the Servants of God:


The recipients of prophecy may be angels, devils, men, women, children, heathens, or gentiles; nor is it necessary that a man should be gifted with any particular disposition in order to receive the light of prophecy provided his intellect and senses be adapted for making manifest the things which God reveals to him.  Though moral goodness is most profitable to a prophet, yet it is not necessary in order to obtain the gift of prophecy


Therefore the gift of prophecy is not confined to Catholic saints and mystics, but outside these sources we are open to trickery and deceit, since we cannot tell if the prophecies are from authentic spiritual vision or if they are given through unclean spirits.  The prophecies of Nostradamus should not be consulted by Catholics, since its source is most likely of the latter category, and therefore leaves the believer open to deceit.  This being said, given that this particular prophecy made by Nostradamus is so well-known, and it fits so well with the other prophecies concerning the turn of the millennium, it would be remiss not to include some mention of it as long as we make this sharp distinction:


The year 1999 seven months
From the sky will come a great King of Terror:
To bring back to life the great King of the Angolmois,
Before and after Mars to reign by good luck.

Another famous prophecy concerning the turn of the millennium is attributed to "St John of the Cleft Rock" who is supposedly a 14th century monk.  I have tried to find the original source of this prophecy, but can't go back any further than Yves Dupont's book Catholic Prophecy, which contains many spurious prophecies.  And the "St. John of the Cleft Rock" this prophecy is attributed to is unknown to history (the only fourteenth century monk called John who predicted the coming of the Antichrist was Jean de Roquetaillade, and this was predicted to occur by the year 1360!).  So we should keep in mind that this is a pseudonymous prophecy of unknown time or origin:


“It is said about twenty centuries after the Incarnation of the Word, the Beast in its turn shall become man.  About the year 2000AD, Antichrist will reveal himself to the world.”


And then there is the prophecy of Pope Leo XIII, concerning the hundred years of Satan's power, which many believe finished at the end of the 20th century (see the post The Prophecy of Pope Leo XIII).
The central theme of each of these prophecies focus on either the fall of Satan or the appearance of the Antichrist (which both may be interrelated - what happens when Satan is cast to earth? Is this the moment he takes human form in the shape of the Antichrist?).
As I will be discussing in future posts, the fall of Satan described in chapter 12 of the Apocalypse is closely associated with the unique series of astronomical phenomena described at the opening of the sixth seal in chapter 6, which is in turn connected with the implementation of the prophecy of the mark of the Beast.  So each of these events - the fall of Satan, the rise of the Antichrist, and the prophecy of the mark of the Beast all appear to be coterminous, and all are heralded on earth through a series of astronomical omens.  As we shall see, these "signs in the sky", can all be connected with a series of unusual astronomical events that occurred between the years 1999-2000.  Did these signs announce the eschatological fall of Satan, and subsequent implementation of the prophecy of the mark of the Beast?

I would love to get together to discuss this stuff with you. I have had mystical experiences my whole life.

Does anyone ever meet to discuss this stuff? It would really help me as my family has put me in mental facilities multiple times because they do not believe me. HELP ME PLEASE!!!

It would be extremely difficult to meet in person for a discussion, but feel free to share any input you have in the com box or by sending an email. Sorry to hear about your family troubles...