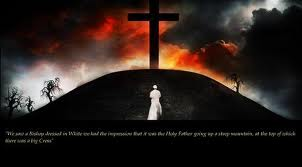 Prophecies concerning the coming of an "Angelic Pope" who will heal the Church of schism and restore the faith have been widely circulated since the Middle Ages.  The first known prophecy of the pastor angelicus was quoted by the English polymath Roger Bacon in the 13th century:


...Forty years ago it was prophesied, and there have been many visions to the same effect, that there will be a pope in these times who will purify Canon Law and the Church of God from the sophistries and deceits of the jurists so that justice will reign over all without the rumbling of lawsuits. Because of the goodness, truth, and justice of this pope the Greeks will return to the obedience of the Roman Church, the greater part of the Tartars will be converted to the faith, and the Saracens will be destroyed. There will be one flock and one shepherd, as the prophet heard (John 10:16)...
(Taken from Roger Bacon's The Third Work. Trans. by B McGinn Visions of the End (New York, Columbia, 1998) p190)


This Angelic Pope has many qualities similar to that of the Two Witnesses.  Like the Two Witnesses, the Angelic Pope is prophesied to restore the faith towards the end of the world.  Working together with the Last Emperor or "Second Charlemagne", the Angelic pope is foretold to heal the East-West schism and convert the Jews to Catholicism.  If Benedict XVI is to fulfill this role, as is suggested by St Malachy's Prophecy of the Popes, it would require some major developments to occur during his pontificate.  Benedict XVI is undoubtedly a Pope devoted to Christian unity, and has repeatedly called for full communion between the East and West (see here and here for example) - asking that the Church should once again "breathe with both lungs". The foundations for full unity between East and West has already been made under the pontificate of Benedict XVI, who is viewed in a more favourable light by the leaders of the Eastern Orthodox Patriarchs. In Ravenna, Italy, in 2007 a joint Catholic-Orthodox commission declared that a basic framework for unification was already agreed, which would begin from the foundation point of both Churches recognising the Pope as titular head (see here) and some form of the authority of the pope would be recognised, and modelled after the role of the pope in the first millennium.
Another development which has brought Roman Catholicism closer to Eastern Orthodoxy is the election of Metropolitan Kirill as the patriarch of the Russian Orthodox Church, who is a lot more favourably disposed towards the Vatican than his predecessors.
So could the unification of the East and West happen under the pontificate of Benedict XVI? Given the advanced age of the present pope, it would seem unlikely that these developments could advance at such an incredible rate as to occur during his lifetime. But situations can suddenly change, especially in light of the miraculous, and if a major supernatural event were to occur it could help to hasten this process.

Following the announcement of Pope Benedict XVI's resignation on 11th Feb, 2013, it appears that this event could be related to the Worthy Shepherd Prophecy - which predicts that the Angelic Pope would ascend the papacy by "about twelve years shall the millennium have passed".


The Second Pentecost
The Two Witnesses
The Great Monarch
St. John Bosco's Dream of the Two Pillars
St. Malachy's Glory of the Olives
Prophecies of the Martyr-Pope

Email ThisBlogThis!Share to TwitterShare to FacebookShare to Pinterest
Labels: the angelic pope, the Two Witnesses

I am more convinced that Pope Benedict is, as the messages of Garabandal describe, the last Pope of these "end times" before the Era of Peace ("1000" years when Satan is chained). He is the one who will have to flee Rome and die a cruel death in hiding....when the Church will seem as though it has disappeared in a time of severe persecution which necessitates the Church/Faith going underground. Then the enemies of God will take advantage of this seeming defeat of the True Faith and attempt to begin that Anti-Christ religion of world secularism/everything thing opposed to God's Truth....that person whom the world will fall for as predicted to be one who will seduce the world due to its utter dependency for its basic needs. He will appear at first as a benevolent do gooder/ecologist type to save the world but will carry out the long plan of the NWO to have a world only for the elitist chosen ones. But, meanwhile, a true Pope (while the NWO will create, through the apostates of the Church of Rome that has been overcome their own "pope type figure" who will do the bidding of the one world new "religion")will be chosen within the hidden Church and will lead the faithful remnant during these times. He will be the Angelic Pope who will anoint and work with the Great Monarch. And you can envision somewhat of a new Crusade of forces under this Great Monarch. Anyway,a possible scenario since the beginning of the creation of this new Time of Peace would seem to necessitate a process of human conversion being led by forces to conquer evil with the help of the God of Mercy and Justice combining His own natural events of perhaps earthly response to the evil....involving earthquakes in various places; floods, etc. to envelop man's own means of destruction with the human instruments of the harnessing of the sun's own power in nuclear weapons, etc. Perhaps that is also within the symbol of the sun itself appearing to come upon the earth for destruction, as it looked to the witnesses at Fatima.

Thanks for sharing your thoughts!
The prophetic dream of St John Bosco (as well as certain elements in the original 1846 secrets of La Salette) appears to suggest that there would be an assassination attempt on a pope (which happened with John Paul II), followed by a pope who is actually assassinated. Then after this, a pope anchors the ship/Church to the two columns of devotion to the Eucharist and Our Lady - which is the Second Pentecost established by the Angelic Pope. Some of the oldest prophecies concerning the Angelic Pope foretell that there would be three "angelic" popes at the end-time, and the death of the martyr-pope is in some way connected to the New Pentecost. So there is a bit of a blurring of the lines here. But I think you are right, and that the victory of the Church will occur in the pontificate of a future pope (the next?), rather than during the reign of the current Holy Father.
The 1000 years isn't really to be equated with the era of peace, but rather with the age of the Church, starting from the binding of Satan through Christ's Holy Sacrifice on the Cross - as was forwarded by St Augustine. Belief in a future 1000 year reign of Christ on earth is the heresy of millerianism. The approved secrets of La Salette tell us that the era of peace won't last a long time before it is disturbed by the appearance of the Antichrist, and the two witnesses who establish the era of peace, are in turn killed by the Beast that rises from the Abyss in Rev 11 - suggesting that the era of peace occurs within the span of a human lifetime. In Hebrew, the term "rab" (great), could mean a thousand years, or a long indefinite period of time. I believe that the unleashing of Satan at the end of the "1000" years already happened with the hundred years of Satan's power foretold in the prophecy of Pope Leo XIII.
You obviously know your stuff!
That's also an interest observation you make concerning the power of the sun and nuclear weapons in relation to the significance of the miracle of the sun...

I think "Bishop dressed in white" could be an emeritus Pope Benedict XVI soon.

I wonder...where is the mountain where the big cross stands by the near future?