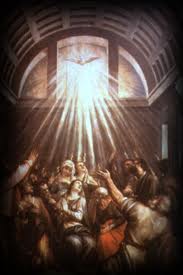 The promise of a global spiritual renewal after a period of general apostasy is a universal theme in Catholic prophecy.  As St. Paul states in his Second Letter to the Thessalonians: "Let no one deceive you in any way.  For that day will not come, unless the rebellion comes first, and the man of lawlessness is revealed, the son of destruction …".  Jesus himself foretold that there would be a falling away from the faith in the approach to the end-time:


And then many will fall away and betray one another and hate one another.  And many false prophets will arise and lead many astray.  And because lawlessness will be increased, the love of many will grow cold. (Matt. 24:10-14)


The Great Apostasy spoken of in Scripture undoubtedly refers to our times.  Christianity is in a state of such steep decline in the Western world that Pope John Paul II called for a "New Evangelisation" to bring back the countless lost sheep led astray by the temptations of deism, agnosticism and atheism, and their bedfellows moral relativism, egoism and hedonism.
Yet the beyond the plight of the Great Apostasy there is the promise of hope.  The Book of Malachi foretells that towards the end of the world, God would send his servant Elijah to "turn the hearts of fathers to their children and the hearts of children to their fathers, lest I come and strike the land with a decree of utter destruction". (Mal 4:6).  Just as the ancient prophet Elijah restored the faith of the Israelites after a period of mass apostasy during the 9th century BC, so too would this future "Elijah" restore the faith from a state of apostasy at the time of the end.  The Book of Revelation tells us that this future Elijah would not act alone his task of restoring the faith - he would be accompanied by a fellow prophet, just as Elijah was accompanied by Elisha.  This additional restorer figure is styled symbolically after Enoch and Moses, and together, the Apocalypse tells us that these Two Witnesses will inaugurate the Second Pentecost.  As Jesus foretold, after this Great Apostasy, where the "love of many would grow cold", the Gospel would be preached to all nations:


And because lawlessness will be increased, the love of many will grow cold. But the one who endures to the end will be saved. And this gospel of the kingdom will be proclaimed throughout the whole world as a testimony to all nations, and then the end will come. (Matt 24:12-14)


It is the Two Witnesses that will bring the Gospel as a testimony to all nations - the "Second Spring" foreseen by Blessed John Henry Newman:


We have familiar experience of the order, the constancy, the perpetual renovation of the material world which surrounds us. Frail and transitory as is every part of it, restless and migratory as are its elements, never-ceasing as are its changes, still it abides. It is bound together by a law of permanence, it is set up in unity; and, though it is ever dying, it is ever coming to life again. Dissolution does but give birth to fresh modes of organization, and one death is the parent of a thousand lives. Each hour, as it comes, is but a testimony, how fleeting, yet how secure, how certain, is the great whole. It is like an image on the waters, which is ever the same, though the waters ever flow. Change upon change—yet one change cries out to another, like the alternate Seraphim, in praise and in glory of their Maker. The sun sinks to rise again; the day is swallowed up in the gloom of the night, to be born out of it, as fresh as if it had never been quenched. Spring passes into summer, and through summer and autumn into winter, only the more surely, by its own ultimate return, to triumph over that grave, towards which it resolutely hastened from its first hour. We mourn over the blossoms of May, because they are to wither; but we know, withal, that May is one day to have its revenge upon November, by the revolution of that solemn circle which never stops—which teaches us in our height of hope, ever to be sober, and in our depth of desolation, never to despair.... (John Henry Newman, The Second Spring, 1852 - for the full sermon go here).


But who are these Two Witnesses?  Can we find any reference to them in the private revelations of Catholic saints and visionaries?  In my book I argue that we can indeed find allusions to the Two Witnesses in two figures who stand out in Catholic prophecy - one possibility is the "martyr-pope" or "angelic pope" foretold in numerous prophecies, and the other may possibly be found in the person of the "great monarch".


The Two Witnesses
The Great Monarch
The Angelic Pope
St. John Bosco's Dream of the Two Pillars
St. Malachy's Glory of the Olives
Prophecies of the Martyr-Pope

Email ThisBlogThis!Share to TwitterShare to FacebookShare to Pinterest
Labels: the Great Apostasy, the Second Pentecost

"that May is one day to have its revenge upon November"

By the Julian Calendar used in Russia at the time, the revolution took part in November 1917, and is therefore often referred to as the November Revolution

Could the 2 Witnesses have something to do with the Spirit and where He was in Jesus time. John must have known the two witnesses and did not take the time to explain them. Let's follow the Spirit. We know John, James and Peter accompanied Jesus to the Transfiguration. Jesus met two men, Moses and Elijah, who were in the Spirit. The event has its own story. We begin here to track the Spirit.

When Jesus dies, the curtain in the temple tears. He we track the Spirit again.

50 days later in an upper room, the Spirit falls on the people who were in the upper the room.

I believe one of the witnesses proclaiming the coming second Pentecost to all nations is vassula ryden. Google her to find her. Read the book True Life In God.